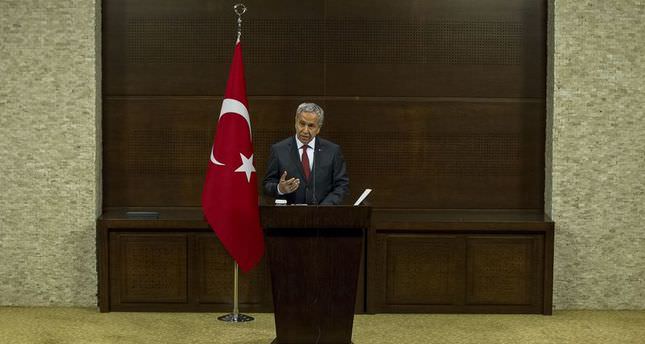 by Daily Sabah Sep 23, 2014 12:00 am
Turkish deputy prime minister and government spokesman, Bülent Arınç, in a press statement following a cabinet meeting held on Monday announced that the law pertaining to the dress code in Turkey's middle and secondary schools (grades 5 through 12) has been amended to lift the ban on headscarves for students.

"The third and fourth articles of the regulation were changed by removing the last sentence of the first clause and the expression 'bareheaded,' " said Arınç, who explained that the changes were made after long hours of discussion. He furthermore said that the amendment was necessary to meet a series of reforms in the democratization package that was previously announced on Sept. 30, 2013. The amended regulation was previously read: "Inside school premises, students must be bareheaded, hair should be clean and un-dyed, students cannot wear makeup nor grow a moustache or beard."

Arınç emphasized the fact that the amendment has long been anticipated by female students who were eager to attend school without having to remove their headscarves. "Many students have been asking me about the amendment," Arınç said, who remarked that many students in his trip to Bursa at the beginning of the school year expressed their enthusiasm on the issue.

The amendment is expected to be publicized on Sept. 23 or the following day according to Arınç.

Turkey's Minister of Education Nabi Avcı made a press statement to clarify a number of issues pertaining to the amendment. He warned that some people who oppose the amendment may try to provoke others and might plan to make a scene, but the government is prepared for them and assured that such actions will not affect the flow of events. He said what is truly important for the government is to meet the needs and demands of the people and explained that all students from fifth grade on can freely wear a headscarf if they wish.

Shortly after the announcement of the removal on the headscarf ban in Turkey's secondary schools, a number of media outlets attempted to depict the amendment as a negative move and claimed that it poses a threat to the principle of secularism in Turkey. Supporters of the amendment claim that it returns a fundamental human right that has long been denied to Turkish women wearing the headscarf as they have openly faced discrimination by the Turkish state.

The issue of headscarves in Turkey's educational and public institutions has long been a matter of heated political debate for decades as millions of women and girls have been forced to remove their headscarves before entering school and could not work as public servants despite the fact that a majority of the women in Turkey wear a headscarf. The ruling Justice and Development Party (AK Party) government has addressed the headscarf issue to ensure citizens' democratic rights as part of the democratization package that also is addressing a number of other rights and freedoms for Turkey's ethnic and religious minorities, the disabled and others.