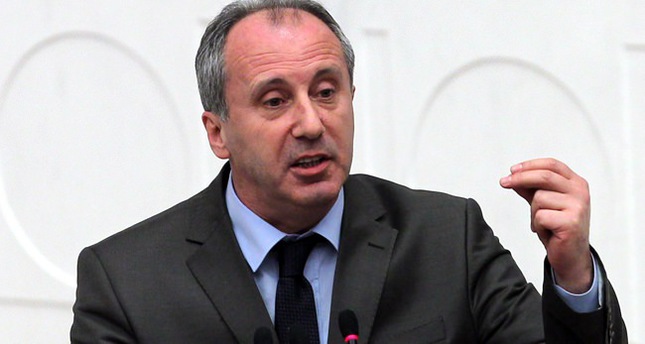 Turkey’s main opposition party, the CHP, is continuously rattling with the aftershocks of its presidential election failure. Party leader Kılıçdaroğlu’s leans toward the right while including conservative figures in the party is still causing fierce debates

The Republican People's Party (CHP) Yalova deputy Muharrem İnce said that his party is going through an identity crisis, following the appointment of a former right-wing party member to the CHP's new deputy chairmanship in charge of public affairs. İnce said, "How can someone who has never stepped foot in the party's building – even to drink tea – run the party?" CHP leader Kemal Kılıçdaroğlu has been accused by intra-party opponents of leaning toward right-wingers. The first cries of criticism came when he nominated Ekmeleddin İhsanoğlu, the former secretary-general of the Organization of Islamic Cooperation (OIC), as a presidential candidate for the Aug. 10 elections. While the country is facing a series of serious regional challenges, Turkey's main opposition party is at a boiling point in terms of intra-party conflicts and is focused on its own problems.


After Erdoğan's presidential election victory, many CHP parliamentarians demanded that Kılıçdaroğlu step down from the party leadership and requested an immediate congress to elect a new chairperson, as a result of which İnce resigned from his deputy chairmanship post and announced his candidacy for the party chair. İnce blamed Kılıçdaroğlu for the CHP's repeated election defeats and changing the party's leftist orientation toward the right. Although Kılıçdaroğlu was elected as the party leader for the third time at an extraordinary congress held on Sept. 5, the party seems to be feeling the aftershocks of it.

Tension escalated with the CHP's last move in which Mehmet Bekaroğlu, who was a member of the far-right Felicity Party (SP), transferred to the party and was included in the Party Assembly by Kılıçdaroğlu. However, what broke the camel's back was Bekaroğlu's recent appointment as the new deputy chairman in charge of public affairs.

Turkey's main opposition party is going through a crisis of identity, according to İnce. "Since Bekaroğlu is a psychiatrist, he can help the party with this situation," he said.

İnce said: "An outsider cannot know the texture of my party. I would not have any objections against him being a mayor or a parliament member, but he cannot run the party."

Bekaroğlu's new post puts him in charge of 130 parliamentarians. This situation is "incredible," according to İnce. "I have served this party since I was 15," asserted İnce, who had to resign from his deputy chairman post following his leadership run against Kılıçdaroğlu. "I washed this party's toilets, hung its flag," he continued.

İnce described Bekaroğlu as an honest person with morals and said that his criticism was not directed against him, but rather the management decisions of the party.

İnce is not the only party member who has raised his voice against Kılıçdaroğlu's managerial methods. The party's 18th extraordinary congress on Sept. 5 was in fact a closely contested election, with more than one third of the CHP delegates (415 votes) voting in favor of İnce, casting doubts on the stability of the party.

Accusing Kılıçdaroğlu of moving away from the spirit of revolution, İnce had previously said that Kılıçdaroğlu is distant from the public and does not understand their demands and expectations. "He does not think about leaving his post at all and has become a politician obsessed with his position. He says different things in different places. You could hear him say completely different things in eastern and western Turkey," said İnce. At the 18th extraordinary congress, which was run on the theme of "unity and brotherhood, Kılıçdaroglu secured his party leadership post in a closely contested election, with 740 delegates voting for him while Ince received 415 votes, according to unofficial figures.

In a more peaceful atmosphere compared to previous CHP extraordinary congresses, which have previously witnessed rows both between delegates and candidates, the rivals shook hands and took to the stage to address guests. In his speech, Kılıçdaroğlu, who has headed the party since 2010, criticized certain intra-party opponents. Addressing CHP members who have turned Turkish politics into a conversation piece of their "rakı table,"Kılıçdaroğlu said that he will purge those members because "what the CHP needs is individuals eager to work, not those who trifle."

Responding to criticism that he had turned into a tyrannical leader, Kılıçdaroğlu said that he will no longer let opponents take to the stage and criticize the CHP, and he will purge certain members for the sake of the party. "We support democracy, but democracy does not mean chaos. Either you follow this party's rules or you leave," Kılıçdaroğlu urged the party members. Continuing his speech, the CHP leader stated that there are party members who behaved as if they were the landlords of the party and pledged to purge them.

Kılıçdaroğlu denied that he has begun to lean towards the right wing and alienate the party's leftist principles. "Respecting any identity or belief does not mean shifting to the right,"Kılıçdaroğlu told delegates. Also, Kılıçdaroğlu listed three criteria that are necessary for the parties success: strong leadership, organizational unity and people working in harmony to come to power. "I will not let the members talk at cross purposes. Democracy means to raise a common voice. This is not a congress arranged to purge, we are on the side of unity."