Airstrikes against ISIS not answer, says Erdoğan, calls for a comprehensive strategy 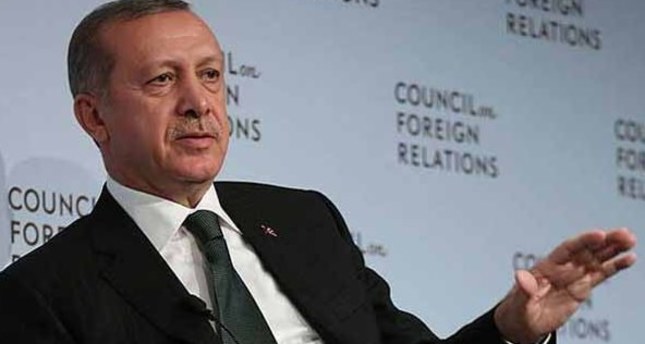 At the U.N. General Assembly, President Erdoğan asked for a comprehensive strategy to combat the ISIS threat in the region by stressing that regional stability is key to solving this crisis

Turkish President Recep Tayyip Erdoğan, in his address at the U.S. think tank Council on Foreign Relations in New York on Monday as part of the opening of the 69th session of the U.N. General Assembly said that military action to halt the advance of the Islamic State of Iraq and al-Sham (ISIS) is not a complete solution and called for broader counterterrorism strategies. "Bombarding terrorist organizations with airstrikes does not yield effective results. A more comprehensive plan should be established to ensure regional stability," said Erdoğan, implying that Ankara still has certain reservations over the U.S.-led coalition against ISIS, which controls large areas of Iraq and Syria. Turkey is looking for a broader solution with a non-sectarian government in Iraq that will embrace all segments of Iraqi citizens, including Sunnis, Kurds, Yazidis, Christians and other minorities.

So far, Turkey has refrained from opining about its possible position in the coalition so as not to put the 49 staff of Turkey's Mosul consulate at risk - which were seized and held by ISIS for 101 days. However, the recent release of the hostages has increased the expectations of Turkey by the U.S. and other nations taking part in the coalition, in particular, for Turkey to step up in the fight against ISIS. Regarding the Turkish hostages released by ISIS, Erdoğan said, "Turkey acted very carefully, taking into account of the security of its citizens."

As Turkish officials said, the release of the hostages was the a result of successful diplomatic negotiations with Sunni tribes in southeastern Turkey, Iraq and Syria. In his speech, Erdoğan denied claims that a ransom was paid, but remained vague about whether a swap occurred. Asked about joining the international coalition to fight the ISIS group in Syria, Erdoğan said Turkey has "no hesitation whatsoever when it comes to fighting terrorism."

He said Turkey has been unjustly criticized for not being clearer on the subject. Turkey did not sign the treaty signed by 10 Arab countries to build a military campaign against ISIS. The treaty was signed by Gulf Cooperation Council states, Egypt, Jordan, Iraq and Lebanon, as well as the U.S.

On Monday, U.S. Secretary of State John Kerry said that he expects Turkey to be included in the coalition to fight against ISIS now that Turkey has secured the release of hostages.

Despite the coalition's escalating expectations, sources close to the Turkish government said that the experiences in Iraq and Libya have caused concern over unplanned air intervention, claiming it may not yield the expected return.

The sources added that air intervention and other initiatives to achieve quick results could lead to significant civilian casualties and further trigger the refugee crisis in the region. "Nations like Turkey have their own clear, vested personal interests in confronting the threat that's posed by ISIL," White House spokesman Josh Earnest said, referring to ISIS by one of its many acronyms. "All of the mayhem and havoc that ISIL is wreaking in Iraq and in Syria is right on Turkey's doorstep. And it's certainly not in their interest for all that instability and violence to be occurring so close to their border."

Holding talks with U.N. Secretary-General Ban Ki-moon, Erdoğan discussed the Syrian refugee issue and Turkey's buffer-zone demand as well.
Reiterating that Turkey has spent over $3.5 billion for Syrian refugees, the Turkish president said that a bufferzone is urgently needed in the region.

Since the onset of the refugee crisis in 2011, Ankara continuously mentioned the need for a buffer-zone, which is meant to be established along the country's border with Syria, to control the refugee influx and ensure a safe and secure expanse for the displaced Syrians beyond Turkish borders.

Over the last three days, Turkey saw a huge flow of Syrian Kurdish refugees fleeing from Kobani where ISIS's advancement has threatened the local community. According to Turkish authorities, the number of Kurdish refugees has reached 130,000 since the opening of the border on Friday, Sept. 19.

Considering the possibility of more refugees to come, Turkey pushed its buffer- zone demand. Russia, as a permanent U.N. Security Council, disagrees with Turkey's buffer-zone demand. Together with the talks held over the past few months, Erdoğan is expected to ask the Obama administration to step in to help convince Russia.
Last Update: Sep 24, 2014 9:47 pm
RELATED TOPICS