PM Davutoğlu: Our anti-ISIS road map based on national interests 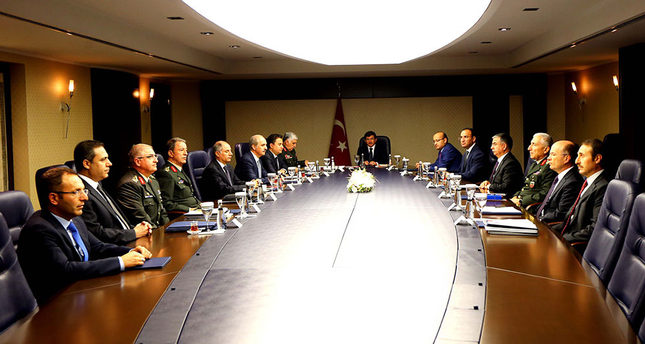 Commenting on speculations over Turkey's possible involvement in an armed engagement against ISIS following the rescue of its hostages from the hands of militant group, Turkish PM Davutoğlu said Turkey does not need to prove its firm anti-terror stance to anyone

Turkish Prime Minister Ahmet Davutoğlu, expressing discontent over the pressure put on the Turkish government to cooperate with the international community in joining military action against the Islamic State of Iraq and al-Sham (ISIS), said Turkey will draw a road map that takes national benefits and concerns into consideration.

Speaking on a private news channel about the release of the 49 consulate staffers abducted by ISIS militants, Davutoğlu said Turkey's approach toward participating in international military action against ISIS will be shaped after every detail regarding the country is calculated. He said that "Turkey can make its own decisions," disregarding pressure from the international community.

Forty-six Turkish citizens - diplomats, consular officials and their families - and three Iraqi citizens working for the Turkish Consulate in Mosul were kidnapped on June 11, a day after ISIS took control of the city. The matter was what caused Turkey, which is both a U.S ally and NATO member, to reject engagement in armed assaults on ISIS. Turkey refrained from signing the Jeddah Communique to use military force against ISIS.

The crisis over the issue grew as the return of the hostages, which stood as an impediment against providing military assistance in the fight against ISIS, prompted Turkey's allies in the international community to push Turkey to step up its cooperation. Turkey refused to join the coalition and agreed to only provide the allies with humanitarian and intelligence assistance.

Now that Ankara's concern has been removed with the hostages being repatriated, Turkey is becoming subject to pressure to join the military action
against ISIS. "To attribute the issue only to the matter of hostages is wrong. It is to ask Turkey what step it will take now. An impression that Turkey is in a test and has to prove itself is given by the international press, which is not the case. Turkey can make its own decisions," Davutoğlu said. With the return of the hostages held by ISIS, Western media outlets have begun discussing whether or not Turkey will take part in the military action begun by the U.S.-led coalition.

Speaking critically of the international community, Davutoğlu accused them of not taking action when Syrians were suffering at the hands of the Bashar Assad regime. "If there is anything to be proved, it is the international community that has failed to speak up against the killings of people with chemical weapons in Syria," Davutoğlu said implying the U.N.'s failure to issue a decision over the matter.

Reiterating that the country's stance toward ISIS has not changed ever since ISIS emerged, Davutoğlu said they "labeled ISIS militants as terrorists" even before the hostages were held in Mosul and will never tolerate its offences, that not only harm people but also Islam.

Referring to the allegations that Turkey supports ISIS, Davutoğlu said, "Our stance toward ISIS is obvious, so is the intention of [international media outlets]. They wanted us to say things that would harm the country. We have national concerns and benefits, which are our priority."

According to foreign policy experts, involvement in any armed coalition against ISIS could lead to an influx of extremist militants into the country that could harm its relations with non-ISIS groups in neighboring countries. Davutoğlu also gave more details over the release of the hostages in a question and answer session broadcast on the NTV news channel. He touched upon the details of the operation conducted against ISIS.

Referring to the allegations of the government paying a ransom for the hostages' release, he said, "We paid no ransom, since paying a ransom puts others in danger while saving some." Davutoğlu also explained how the hostages were freed in the operation. He had given Turkey a piece of good news on Saturday announcing that the abducted consulate workers were released in an operation conducted by the National Intelligence Organization (MİT).

In Monday's session he also announced sadly that, "Some of our unidentified officials are from the MİT. I know who they are. I gave them the orders hosting them in the office of the Prime Ministry five days before the operation.

One local providing the Turkish spy agency with intelligence was executed after his identity was revealed. He was a lover of Turkey and now he will be remembered as an anonymous hero." He said that the utmost fear pertaining to the hostages held by ISIS was the fear of a bomb falling on where they were kept. He added that they issued an ultimatum to the ISIS militants saying if they treated the citizens as hostages they would face a different kind of dealing. "We tried to avoid using the word 'hostage' while negotiating with them," Davutoğlu said.

Davutoğlu also responded to the allegations targeting the government over the presence of bargaining to exchange the hostages with ISIS militants. Giving an indirect response to the reporter's question, Davutoğlu said if the lives of the hostages were "on the line" anything could have happened. "What matters is they are back safe and sound. What matters is how successful the operation turned out. The one stable fact is that we didn't pay a ransom and will never [in the future]," Davutoğlu said.

He concluded his speech by calling on opposition parties to unite in cases of pain and sorrow. "I appreciated the leader of the main opposition party for his call to congratulate us, a move that I also expected from the leaders of the Nationalist People's Party [MHP] and The Peoples' Democratic Party [HDP]."

Kılıçdaroğlu phoned Davutoğlu on Saturday to congratulate him over the government's success for bringing back the 49 Turkish hostages from Mosul. Kılıçdaroğlu was quoted as saying "I'm glad that our citizens could safely return to our country." Davutoğlu reportedly admitted to the congratulations Kılıçdaroğlu extended.
Last Update: Sep 24, 2014 11:21 am
RELATED TOPICS