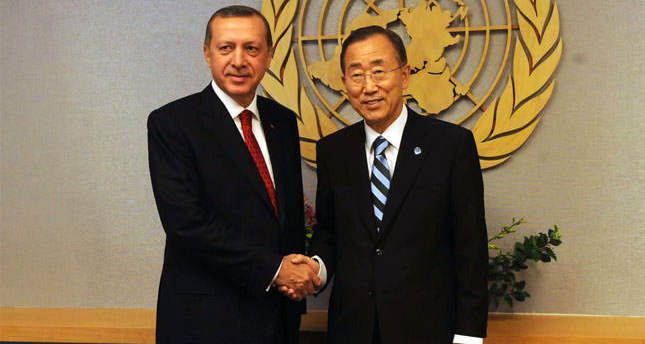 by Daily Sabah Sep 24, 2014 12:00 am
Turkish President Recep Tayyip Erdoğan believes that the current structure of the U.N., specifically the U.N. Security Council (UNSC), is an obstacle in the way of the resolution for the ongoing problems around the world. Criticizing the U.N.'s structure and its decisionmaking mechanisms, Erdoğan said he does not believe that the current U.N. structure will solve the current issues facing the global community.

Turkey's priority in the 69th U.N. General Assembly is to gain the candidacy for a non-permanent membership in the U.N. Security Council for the 2015-2016 term ahead of the elections to the UNSC in October.

In previous years, Erdoğan criticized the UNSC, and said, "It is unacceptable that the world is in the hands of only five permanent members of the UNSC."

Turkey stressed the structure has failed to facilitate the decision-making process and criticized the fact that one member's objection is enough to halt an urgent draft that could solve an international crisis. The permanent members of the UNSC, which are also known as the permanent five, are China, Russia, the U.S., France and the U.K. Each of the permanent members has the power to veto any action, enabling them to prevent the adoption of any draft, regardless of the level of international support for it.
Last Update: Sep 24, 2014 10:41 am
RELATED TOPICS