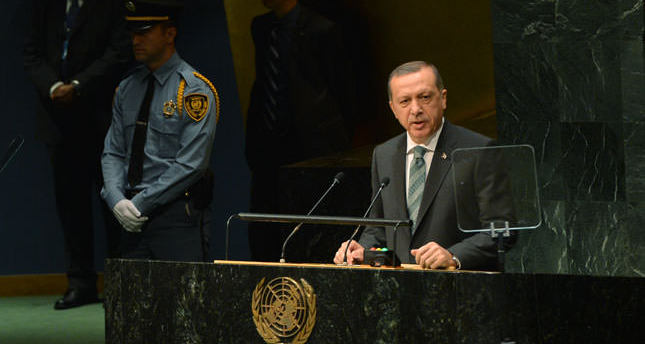 Turkey, as part of the anti-ISIS coalition, intends to provide military and political backing through a safe zone for refugees on the Syrian border and establish peace in the region

As Turkish President Recep Tayyip Erdoğan announced on Tuesday that Ankara supports the U.S.-led coalition against the Islamic State of Iraq and al-Sham (ISIS) both militarily and politically, he pushed his demands for a safe zone along the border for refugees to ensure a secure area within and beyond Turkish borders at the U.N. General Assembly in New York as well as making clear that he required no Turkish boots on ground for military actions. Pledging to provide the necessary support to the U.S. in its operation against ISIS, Erdoğan said Tuesday the support has both political and military aspects and that Turkish senior officials will hold talks with regards to clarifying to what extent Turkey will continue its support of the anti-ISIS operation. Speaking to Daily Sabah, sources close to the Turkish government said Turkey's national interests would be of paramount importance in deciding how to support the coalition.

The sources also stated that establishing a "safe-zone" along the country's border with Syria to control the refugee influx and ensure a safe and secure expanse for displaced Syrians beyond Turkish borders and Turkey's "no-fly-zone" request over its borders are what Ankara is pushing for during talks in exchange for allowing the anti-ISIS coalition to use Turkey's İncirlik base for combatting ISIS.

Erdoğan said that Turkey supports the latest airstrikes carried by the U.S. on ISIS positions in Syria and should be carried out continuously. He also echoed his sentiments in an interview with American journalist and talk show host Charlie Rose that the airstrikes against ISIS are only one part of the solution.

"If you only go with airstrikes this means that you are not fully involved in this struggle," Erdoğan said. "There will be things that need to be done by air, on the ground, from an intelligence perspective, a political and a humanitarian perspective."

The bombs by the U.S. and its Arab allies rained down on the eastern cities of Raqqa, where ISIS has its headquarters, Deir al-Zor, Hasakah and Albu Kamal. Scores of ISIS insurgents in the cities were killed, according to officials. U.S. forces had acted alone to launch eight strikes in another area of Syria against the "Khorasan Group," an al-Qaida unit U.S. officials have described in recent days as posing a threat similar to that of ISIS.

Speaking to reporters amid his busy schedule at the assembly, the Turkish president reiterated that Turkey is ready to do its part in combatting terrorism activities. Erdoğan noted that Turkey has not been fully informed how and which ISIS controlled cities were shelled, but still Turkey has a positive stance on the intervention against terrorist organizations. The president underscored that a recess in the air strike should not be considered at this moment and that this roadmap should be pursued with a joint commitment.

Calling for others to look at the big picture when evaluating the latest developments in the region, Erdoğan said if there is a fight against terrorist organizations, this fight must include all terrorist organizations with no discrimination, by referring to Turkey's decades-long struggle against the outlawed PKK, which took up arms against Turkey in order to carve out a separate state in southeastern Turkey.

On Monday, the PKK called on fellow Kurds to cross into Syria and combat ISIS insurgents besieging a town near the border. The statement issued by the PKK reads, "We call on our entire people, as well as our friends, to step up the resistance."

The PKK has been listed as a terrorist organization by the EU and the U.S., but following recent developments in Syria, some German politicians suggested a new approach toward the group due to its role in fighting ISIS. Continuing its firm stance, Turkey has some reservations. According to Turkish Foreign Minister Mevlüt Çavuşoğlu's recent remarks, Turkey feels the PKK should not receive international weapons meant for use against ISIS in neighboring Iraq.

On Turkey's safe-zone and no-fly-zone demands that are continuously reiterated by officials, Erdoğan said a secure area within and beyond Turkey's borders is substantial.

"As I said, the no-fly-zone is significant since Turkey hosts 1.5 million Syrian refugees who fled from troubled cities in the region. We [Turkey] experience the sociological cost this situation [refugee influx] brings to us. It needs to be handled," Erdoğan cited.

Criticizing the U.N. for being late in taking action on Syrian refugees within Turkish borders and Ankara's demands in this regard, Erdoğan said that he does not have any expectations from the U.N. anymore because of its stalling on these issues. During his talks with Turkish chief editors in New York, the president was quoted as saying: "The refugees cost around $3.5 billion (TL 7.8 billion); they [the U.N.] delivered only $150 million in assistance. This is not about money, but what is going to be next?"

He further reiterated Turkey's demand for a more comprehensive and versatile strategy in combatting ISIS by saying that airstrikes alone will not yield the expected results because the aim should not only be to fight against ISIS, but also fight against all terrorist organizations in the region.

As part of Turkey's efforts to gain the non-permanent seat on the U.N. Security Council (UNSC) for the 2015 to 2016 term ahead of the elections to the UNSC in October, Turkish officials held intensive talks with other leaders attending the assembly to gather enough support for the non-permanent seat.