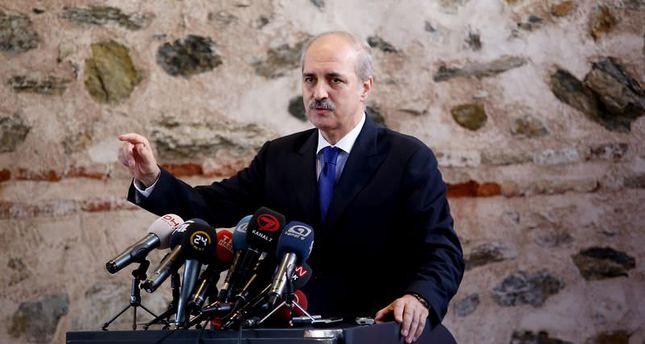 by Daily Sabah Sep 25, 2014 12:00 am
Turkish Deputy Prime Minister Numan Kurtulmuş has stated that Syrian Kurds fleeing Kobani have no 'permanent' friends other than Turkey, referring to the indifference of the international community with regards to providing shelter for the refugees.

Kurtulmuş speaking to a private news channel responded to reporters' question over the issue of thousands of refugees driven into Turkish territory by the assaults of ISIS whose offensive continues in the border town of Ayn al-Arab in Syria --known as Kobani in Kurdish.

Turkey continues opening its doors to the war-torn Syrian Kurds amidst some national reactions, providing them with shelter as well as various other aid supplies. Kurtulmuş, highlighting the significance of the hand Turkey extends to the needy Syrian refugees who have fled the ferocity of ISIS attacks, claimed that Turkey was the only genuine supporter of the Syrian Kurds, deeming foreign communities' support as 'temporary'.

"Turks are the only friends of displaced Syrian Kurds." Kurtulmuş was quoted as saying.

ISIS militants attacked the Kurdish town of Kobani to capture it more than a week ago. There were reportedly 142,000 Syrians since Sept. 18 who fled the town and surrounding villages to cross the nearby Turkish border.

The influx of more than 140,000 Kurds since last week has raised worries for the country where the conflict in its southern neighbor has already forced over 1.3 million people to take shelter in Turkey.

Responding to a reporter's question over Turkey's demand for a buffer zone, Kurtulmuş said, that requires the approval of the United Nations adding that an entity of a buffer zone would halt ISIS to freely move in the region.

The buffer-zone issue was also brought up in the UN general Assembly. Ankara hopes that presence of a buffer zone will strengthen the Syrian opposition, prevent militants from threatening Turkey and help deliver immediate humanitarian aid to civilians in the region. The demand was given a cold shoulder by Russia which is a UN Security Council member country and is currently awaiting an approval from the UN.

Kurtulmuş, also recalled that the refugees taking shelter in Turkey were grateful for being able to asylum in the country, stating that most of the refugees told authorities they were content with the good conditions facilitated for them in the region. Kurtulmuş said they were prepared for the worst case scenarios and signaled that a new wave of refugees are about to cross in to Turkey.

Meanwhile, more than 1,000 Kurdish refugees crossed the Mursitpinar gate back to neighboring Kobani on Wednesday, despite the danger posed by the ISIS militants, according to an eyewitness.

The refugee supposedly told reporters on Wednesday night that they were miserable even though their relatives in Turkey were trying to shelter them.

"Even though there is life-threatening danger over there, we want to go back," she said, while waiting in front of the border gate with her eight other family members.

Their appeal was turned down by the Turkish army, which blocked the crossing for the rest of the day until this morning.

Speaking by the border crossing today was mother-of-eight Selma Shekhmuz. She said:
"We don't have enough money to survive. Life is expensive here. We took shelter in Kobani two years ago leaving Damascus. We are scared but we do not have any other option. I have been here for the last six days."

35 buses set off from Istanbul, heading to Kobani

Undertaking a massive aid operation for those fleeing into Turkey, authorities are also struggling to hold off Turkey's Kurds attempting to cross into Syria to join the fight of their brethren against the Islamic State of Iraq and al-Sham (ISIS).

The issue caused tension between Police officers and a group of HDP members who aimed to go to Suruç by buses from Istanbul's Kadiköy district on Thursday. HDP co-chair Figen Yüksekdağ reacted against police intervention by calling out: "Do you want a war?" addressing the police.

As the group walked towards their buses, the police set barricades to prevent the group from setting off. Following negotiations between the HDP members and the police the buses could set off to Suruç.

Reportedly 35 buses set off to head for Suruc. Yüksekdağ, in a press release said they wanted to go to Suruç to give support to the people of Kobani but were impeded by the government.

The opposition People's Democracy Party (HDP) and Democratic Regions Party (DBP) are coordinating the flow of members of the Kurdish community across the country to the border. They are looking for ways to travel to Syria's Kobani to join the fight against ISIS with the Kurdish militants of the People's Protection Units (YPG). Exploiting the turmoil on the border, Kurds affiliated with the two parties have confronted the Turkish security forces deployed there.