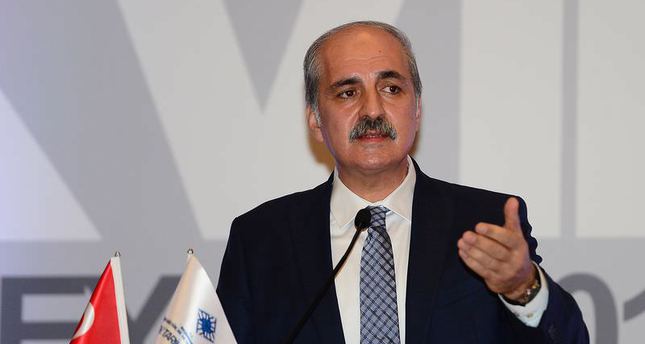 by Daily Sabah Sep 25, 2014 12:00 am
Turkish Deputy Prime Minister Numan Kurtulmuş met with Peoples' Democratic Party (HDP) Group Deputy Chairs Pervin Buldan and İdris Balüken as well as Istanbul Deputy Sırrı Süreyya Önder. Kurtulmuş touched upon the reconciliation process that started between Ankara and Kurds with a Justice and Development Party (AK Party) initiative and stressed that the agenda of the meeting was on how the government and HDP can cooperate to lead the process to its conclusion.

"We will finalize this process with political sense. Besides, if a country surrounded with bloody wars beyond its border ensures peace within itself, this peace is of the utmost importance for the future," Kurtulmuş said.

Buldan pointed out that the HDP committee wants to hold talks on the process and added that the HDP is trying its best to do the party's share.

Referring to HDP leader Selahattin Demirtaş's remarks that if the process is not finalized in the upcoming week, the process will die on the vine for the HDP, Kurtulmuş said, "We are talking about a 30-year-old question for which we all paid the price."

Noting that disarmament alone is not enough for the process, Kurtulmuş said that provocations also need to end.

Although recent provocations, including pulling down the Turkish flag at the Air Force Command and erecting a statue of a PKK member in the predominantly Kurdish southeastern Turkey, were attempts to undo the reconciliation process, Kurdish exiles who left Turkey years ago started to return as part of the process.

The reconciliation process began in early 2012 to end the PKK threat and address the problems of the Kurdish community. The government pledged democratic reforms to empower minorities, particularly the Kurds, which is by far the largest at 18 percent of the population.

In the last few months it was announced that a road map for the reconciliation process is on the agenda of the government based on other examples across the world such as the Good Friday Agreement between the British government and the Irish Republican Army (IRA).