No one is innocent when children are killed, Erdoğan says at UNGA 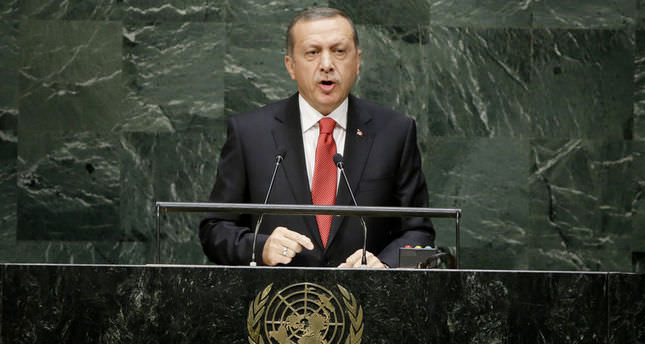 by Daily Sabah Sep 25, 2014 12:00 am
Turkish President Recep Tayyip Erdoğan launched a scathing attack on Egyptian President Abdel-Fattah el-Sissi as well as the U.N. itself during his speech at the U.N. General Assembly on Wednesday.

In his address in New York, President Erdoğan said that the inaction of the U.N. Security Council has led to the killing of innocent people and military coups, which has caused "despair, distrust and contemporary international terrorism."

During the crucial UNSC meeting, chaired by U.S. President Barack Obama and attended largely by heads of state coming from 15 member states, Erdoğan delivered a speech in which he directed harsh criticism at Egyptian President el-Sissi, who had gone up to the rostrum shortly before Erdoğan.

Mohammed Morsi, who won Egypt's first free presidential election in 2012, was ousted by the military in July last year following protests against his first and only year in office. Following his ousting, relations between Cairo and Ankara soured with Egypt downgrading its diplomatic relations with Turkey to the level of charge d'affaires and recalling its ambassador from Ankara. Turkey responded with the same measures, declaring Egypt's ambassador to Turkey persona non grata.

Forging a close alliance with Morsi, Turkey has emerged as one of the fiercest international critics of Morsi's removal, calling it an "unacceptable coup" by the army. El-Sissi, the former head of the Egyptian army, was elected president in May. But Erdoğan said that it is impossible for him to recognize a government formed by a military coup, in reference to el-Sissi's administration.

After Morsi's toppling, Muslim Brotherhood supporters staged weeks of protests in Cairo, where 1,150 demonstrators were killed according to Human Rights Watch.

Erdoğan, criticizing the U.N., said, "Those who stay silent about the massacre of children, innocent women and the overthrowing of democratically elected governments with weapons and military vessels are actually taking part in those crimes. The U.N., as well as [other] democratic countries have done nothing but watch the events such as overthrowing the elected president in Egypt and the killing of thousands of innocent people who want to defend their choice. And the person who carried out this coup is being legitimized [by the U.N.]."

"Those who raised their voices against the murders in Syria and Iraq and against the massacre of democracy in Egypt are also being unjustly labeled and accused of supporting terrorism" Erdoğan added.

Egyptian security forces have mounted a fierce crackdown against the Islamist movement, killing hundreds of supporters at a Cairo protest camp, arresting thousands of others and putting Morsi and other leaders on trial.

"If we defend democracy, then let's respect the ballot box. If we defend those who come to power not with democracy but with a coup, then I wonder why this U.N. exists," Erdoğan said in his speech.

Ahead of Erdoğan's stinging criticism of el-Sissi's administration, it was claimed by Egyptian media outlets that Erdoğan and el-Sissi were going to meet in New York, but the Turkish presidency press advisor Lütfullah Göktaş denied the claims by saying, "Erdoğan's position toward the 'coup-maker' Gen. Abdel-Fattah el-Sissi is clear. The reports regarding the meeting of Erdoğan and el-Sissi are absolutely not true. We didn't make any requests or demand a meeting from the Egyptian delegation in New York."

Egypt condemned Erdoğan's speech. A scheduled meeting on the sidelines of the U.N. General Assembly meetings for Thursday between Turkish Foreign Minister Mevlüt Çavuşoğlu and Egyptian Foreign Minister Sameh Shukry was cancelled, officials reported. The meeting was set to take place in New York and would have been the first between the two chief diplomats.