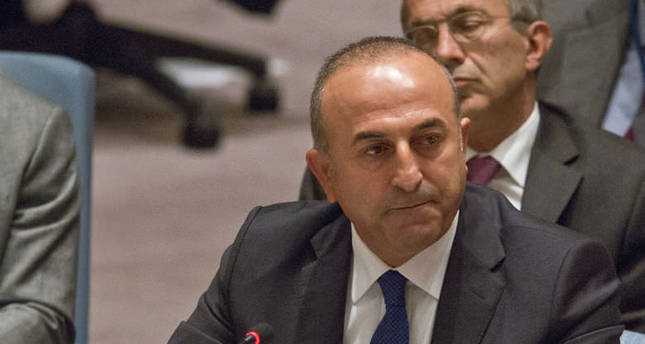 by Daily Sabah Sep 25, 2014 12:00 am
Turkish Foreign Minister Mevlüt Çavuşoğlu on Thursday dismissed the claims that Turkey insisted to have a bilateral meeting with Egyptian officials during the U.N. General Assembly meetings held in New York.

Çavuşoğlu said that in the previous meetings held in Jeddah and Paris, he met with his Egyptian counterpart Sameh Shoukry and both ministers agreed to have a bilateral meeting in New York, later on, the countries' ministry offices has made some arrangements.

"Now, Egyptian officials act as if Turkey especially insisted on the meeting to happen, we do not find this attitude professional," he said.

Çavuşoğlu also commented on Egyptian condemnation over President Erdoğan's speech at the U.N. General Assembly on Wednesday, which he criticized the U.N. for its inaction on the coup in Egypt which deposed the first democratically elected President Mohammed Morsi.

"No country, which seeks justice, freedom and democracy, should feel distressed about the president's speech, Turkey has never changed its attitude on democracy, and we are against coups and killing people randomly on streets. We are against the abuse of human rights and death sentences," he said.

Mohammed Morsi, who won Egypt's first free presidential election in 2012, was ousted by the military in July last year following protests against his first and only year in office. Following his ouster, relations between Cairo and Ankara soured with Egypt downgrading its diplomatic relations with Turkey to the level of charge d'affaires and recalling its ambassador from Ankara. Turkey reacted with similar measures.

In the past days, Egyptian media reported that Turkish President Recep Tayyip Erdoğan and Egyptian President el-Sissi are to meet in New York. A Turkish presidential press advisor, Lütfullah Göktaş, denied the claims by saying, "Erdoğan's position toward the 'coup-maker' Gen. Abdel-Fattah el-Sissi is clear."