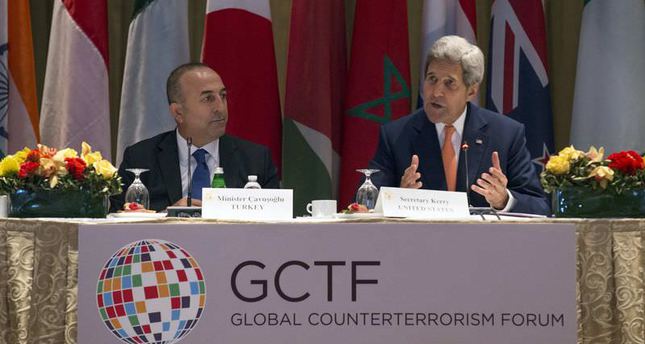 by Ragıp Soylu Sep 25, 2014 12:00 am
Secretary John Kerry met his Turkish counterpart Mevlüt Çavuşoğlu on Tuesday before co-chairing the 5th ministerial meeting of the Global Counterterrorism Forum in New York and said that the United States was confident that Turkey wasn't supporting Islamic State of Iraq and Sham (ISIS), according to official Turkish sources.

A senior Turkish official stated that Kerry raised the foreign fighters issue in the short meeting and confessed that even US was struggling to protect its Mexican border against illegal immigration. "He was showing an understanding about the foreign fighters who trespass the Syrian borders. He said that he knows that the border is too long and ensuring a secure border is very difficult. He was sure that the Turkish state doesn't support the illegal activities happening down there." Many news reports for the past five years show that a massive trade of narcotics and illegal immigration activities take place in Mexican borders, "in this regard both borders having the similar problems" the official said. Çavuşoğlu also provided some statistics about Turkey's crackdown against oil smuggling on the Turkish borders in the meeting. He, in contrast to many reports published by American press, indicated that Turkey wasn't turning a blind eye to smuggling and therefore confiscated 50 million liters of oil last year, confiscating 78 million liters in only the first six months of the year.

After the meeting Kerry gave an introductory speech at the Forum, looking very eager to push Turkey to the "frontlines" of the battle following the release of 49 hostages from ISIS captivity. "I'm very pleased with the meeting I just had with Minister Çavuşoğlu, who reiterated what President Erdoğan said to me the other day when I was in Ankara. Turkey is very much part of this coalition and Turkey will be very engaged on the frontlines of this effort." Kerry stated. He said that although Turkey had an initial challenge with respects to its hostages the issue was resolved and Turkey was ready to take additional steps. "We are very grateful to Turkey for the willingness" he added.

Kerry's remarks sparked a big debate on social media about Turkey's role in the anti-ISIS coalition, even surprising the journalists that were following the official visits of the United Nations. One Turkish official accepted that they weren't expecting Kerry's strong wording about Turkey's "engagement on the frontlines." So far Ankara chose a very cautious path related to anti-ISIS efforts, as Turkish hostages were the top priority for the country. However President Tayyip Erdoğan on Tuesday amended this tone very significantly and declared that Turkey was supporting the latest air strike campaign against ISIS, "It shouldn't stop" he said.