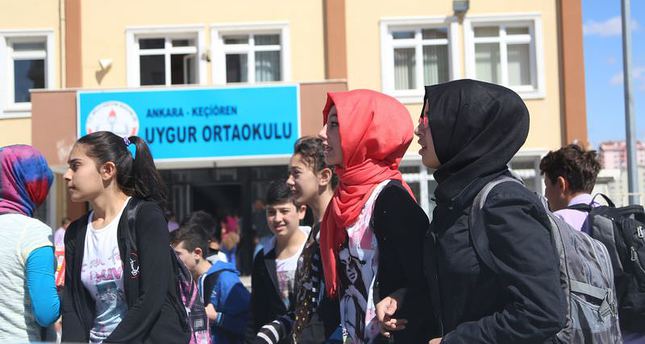 by Daily Sabah Sep 26, 2014 12:00 am
Following the ruling Justice and Development Party's (AK Party) amendment to the law pertaining to Turkey's middle and secondary schools (grades 5-12) to lift the ban on headscarves for students, a pollster, Mak Consultancy, conducted a survey to determine voters' support of the amendment. According to the survey, which was conducted in 41 cities with the participation of 4,320 people, 98 percent of AK Party voters supported the amendment, while 91 percent of Nationalist Movement Party (MHP) voters stated that they supported the lifting of the headscarf ban in middle and secondary schools; 88 percent of pro-Kurdish People's Democratic Party (HDP) supporters were in favor of lifting the ban. The lowest support for the amendment came from main opposition Republican People's Party (CHP) voters.

In general, 61 percent of citizens found the lifting of the ban as a positive step, whereas 22 percent stated they were against it, while 17 percent refrained from providing an opinion.

On Monday, government spokesman and Deputy Prime Minister Bülent Arınç, in a press statement following a cabinet meeting, announced that the law pertaining to the dress code in middle and secondary schools (grades 5-12) had been amended to lift the ban on headscarves for students.

Arınç emphasized that the amendment had long been anticipated by female students who were eager to attend school without having to remove their headscarves. "Many students have been asking me about the amendment," Arınç said, adding that many students on his trip to Bursa at the beginning of the school year expressed their enthusiasm on the issue.