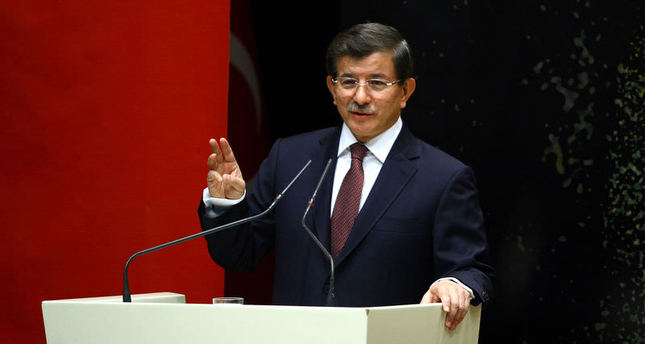 by Daily Sabah with AA Sep 26, 2014 12:00 am
Prime Minister Ahmet Davutoğlu at AK Party's Extended Meeting for the party's Provincial Chairmen has touched upon a number of important issues and commenting on the anti-ISIS coalition's armed engagement against the militant group, he said that Turkey would only lend support to a military operation that aimed to create peace and stability in the region.

"Regional peace and stability is a core essential for us [Turkey] to remain as a stability hub. If a military operation option, with a perspective of ultimate peace, is aiming to bring peace to the region, we would lend our support to it," Davutoğlu said.

Speaking on speculation over Turkey's possible involvement in an armed engagement against ISIS following the rescue of its hostages from the hands of the militant group, the prime minister said Turkey does not need to prove its firm anti-terror stance to anyone and added that Turkey will draw a road map that takes national benefits and concerns into consideration.
"To attribute the issue only to the matter of hostages is wrong. It is to ask Turkey what step it will take now. An impression that Turkey is in a test and has to prove itself is given by the international press, which is not the case. Turkey can make its own decisions," he said.

"In only three days last week, 138,211 of them entered our territory. With the incoming Syrians, the total number of refugees in Turkey has exceeded 1.5 million," he said.

Turkey opened the frontier last Friday to cope with a rush of Kurdish civilians fearing an attack on the Syrian border town of Ayn al-Arab, known as Kobane in Kurdish, in the province of Raqqa.

Stating that the total number of refugees seeking refuge from Syria has reached 160,335 Davutoğlu touched upon the recent attempts to create provocation against the refugees in Suruç. He criticized those who oppose the government's open door policy and stated Turkey welcomes all its Arab, Turkmen and Kurdish brothers and sisters whose lives are threatened by the ISIS.

Underlining the fact that the government will continue to work towards the reconciliation process, the prime minister expressed that the People's Democratic Party deputy who previously threw stones at Turkish soldiers who tried to stop Kurdish people from crossing the border to Syria will not discourage the government nor the people from proceeding with the reconciliation process.

The Syrian civilians seeking shelter from the ISIS assault on their villages are being registered at a coordination center set up by Turkey's Disaster and Emergency Presidency upon entry to Turkey.