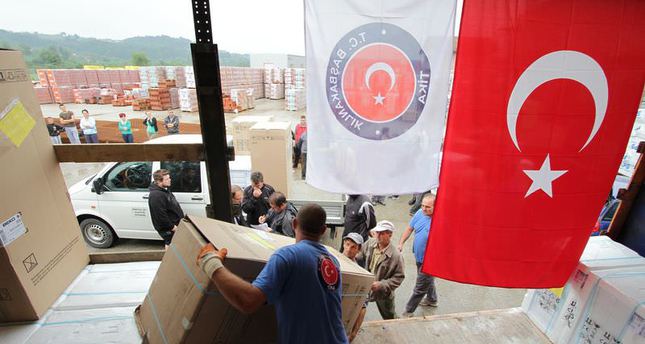 by Daily Sabah with AA Sep 26, 2014 12:00 am
Turkish Cooperation and Coordination Agency (TiKA) has rejected the claims that the agency helped people and institutions allegedly linked with the self-proclaimed Islamic State of Iraq and al-Sham (ISIS) according to a statement by the agency.

"Some media outlets have brought up false claims and information about the agency's international cooperation activities in Kosovo. These claims are intentionally targeted at organizations focusing on people's well-being, safety, and building a friendly and brotherly environment where people from different nations can live," said the statement from Friday.

According to the statement, the Turkish aid agency has dismissed the claims about Fatih Sultan Mehmet Mosque in Kosovo's capital Pristina, adding the allegations are groundless and unrealistic.

Turkish daily Taraf claimed that Kosovo police launched an operation against radical groups, arrested 30 imams who are thought to send militants to fight in Syria and Iraq and shut down sixteen associations and foundations on charges of aiding members of ISIS, the al-Nusra Front and other al-Qaeda-linked organizations.

The paper claimed that Sefcet Kranici, the imam of Pristina's Fatih Sultan Mehmet Mosque, was among the arrested imams aiding the members of militant groups in Syria and Iraq.

"The renovation of the Fatih Sultan Mehmet Mosque was carried out within the framework of development project between Kosovo and Turkey and protocol related to TİKA Kosovo Program Coordination Office Statute," the statement said.

The statement added that TİKA implemented all of its projects and activities in line with Turkish laws.

"TİKA can not be held responsible for a religious man who is appointed on Kosovo soil by local authorities and his activities in the country," the statement said. Deputy Prime Minister Numan Kurtulmuş also indicated "regrettably, this news is a pack of lies and complete slander," regarding TİKA.
Last Update: Sep 27, 2014 10:02 am
RELATED TOPICS