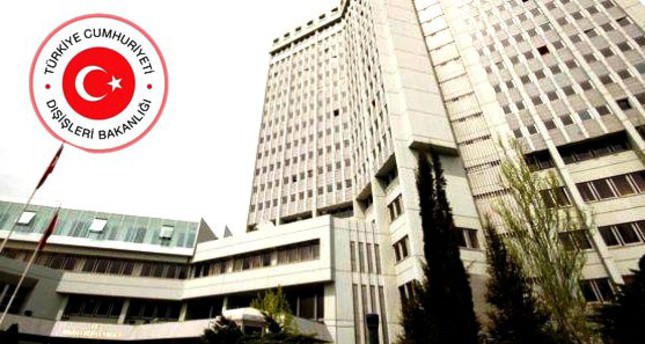 by Daily Sabah Sep 27, 2014 12:00 am
Turkey's Ministry of Foreign Affairs has issued a statament regarding the statement published by the United Arab Emirates pertaining to Recep Tayyip Erdoğan's stance on the military coup in Egypt and expressed that countries do not hold the right to question and accuse Turkey.

"Turkey has a stance which takes democratic principles as the legitimate form of governance and some states may be disturbed by this." read the statement, which continued by saying that the United Arab Emirates' statement has contradicted diplomatic practices while noting that such statements are not acceptable. Likewise, the statement expressed that Turkey consistently promotes a foreign policy which focuses on the demands of the people under the scope of the rule of law and international legal principles. "As a result of such determined stance, Turkey opposes the overthrowing of democratically elected governments through coups and similar measures and such anti-democratic measures create tremendous gaps between the rulers and the ruled." read the statement, which expressed that the UAE should respect fundamental principles of international relations and not interfere in issues not directly related to their own state.

In his address at the United Nations in New York, President Erdoğan said that the inaction of the U.N. Security Council has led to the killing of innocent people and military coups, which has caused "despair, distrust and contemporary international terrorism." Moreover, he has called on all world leaders to respect the democratic elections and not defend those who come to power through a coup.