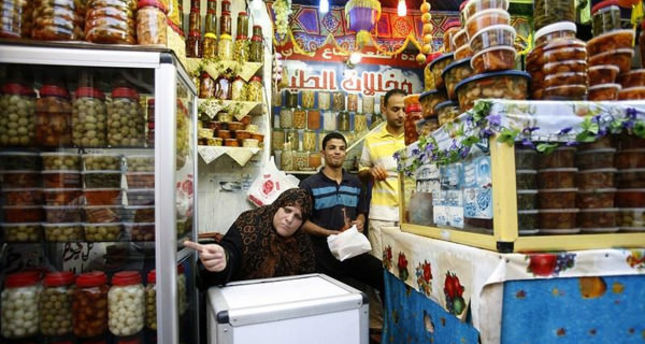 by AA Sep 29, 2014 12:00 am
Some Egyptian writers and political movements have called for boycotting Turkish products in response to what they describe as "unjustified" attacks on Egypt by Turkish President Recep Tayyip Erdoğan.

Advocates of the boycott note that Egypt is a major importer of Turkish products and that a boycott of these products would take a toll on the Turkish economy.

Egyptian lawyer Samir Sabri filed a lawsuit last week to force the Egyptian government to ban the entry of Turkish products into the country. A court is expected to rule on the case on December 2.

Television anchor and writer Gamal Anayet has also called for boycotting Turkish products and has even encouraged Egyptians to drop Turkey as a tourist destination.

"Boycott is a simple and thorough [means by] which we can affect Turkish policies," Anayet said during his "New Evening" talk show on the private Al-Tahrir channel.

"Turkish products have alternatives in Egypt," he added, inviting Egyptians to buy Egyptian products instead of their Turkish counterparts.

Political analyst Michel Fahmi, for his part, called for a strong public boycott of all products, services and arts coming from Turkey.

He said that striking at the economic interests of those who "harbor inimical" attitudes toward Egypt would cause them pain.

"Economic sanctions will be much tougher than political sanctions," Fahmi said.

Female writer Reem Eid called for launching a public boycott of Turkey and Turkish products in response to Turkish policies against the Egyptian authorities.

In a statement, she called on Egyptians to join the campaign by boycotting Turkish products and Turkish tourist sites.

The Congress Party, founded by former presidential candidate Amr Moussa, has also launched a boycott campaign across the Arab world against Turkey, its products and tourist sites.

Party assistant chairman Tamer al-Zaydi said in a statement that an appropriate response to Turkish actions was not for Egyptians to slander the country or criticize its president.

"The appropriate response will come through an Egyptian-Arab public boycott campaign against Turkish products and TV serials," al-Zaydi said. "Egyptians and Arabs must also stop travelling to Turkey."

Relations between Egypt and Turkey have taken a turn for the worse since Egypt's military ousted elected president Mohamed Morsi in July of last year.

Tensions between the two countries reached their nadir last November, when Egypt declared the Turkish ambassador in Cairo "persona non grata" and Turkey responded in kind.

While addressing the U.N. General Assembly late last week, Erdogan again lashed out at the new regime in Egypt. He accused the international community of lending legitimacy to Egyptian President Abdel-Fattah al-Sisi, widely seen as the architect of Morsi's ouster last year.

Egypt's Foreign Ministry replied by saying that the Turkish president's address contained "lies" and disregarded the "will of the Egyptian people."

Despite political tensions between the two states, some 30,125 Egyptians visited Turkey between January and April of this year, compared to 37,299 who visited the country in the corresponding period last year, according to Turkey's Tourism Ministry.

The ministry added that some 10,600 Turkish tourists had visited Egypt between January and April this year, compared with 25,289 who visited in the corresponding period last year.

Trade exchanges between Egypt and Turkey, meanwhile, reached a total of $5 billion last year, including $3.5 billion of Turkish exports to Egypt, according to Egypt's Trade Ministry.

Around 418 Turkish companies also operate in Egypt, especially in the textiles, food and petrochemical sectors.