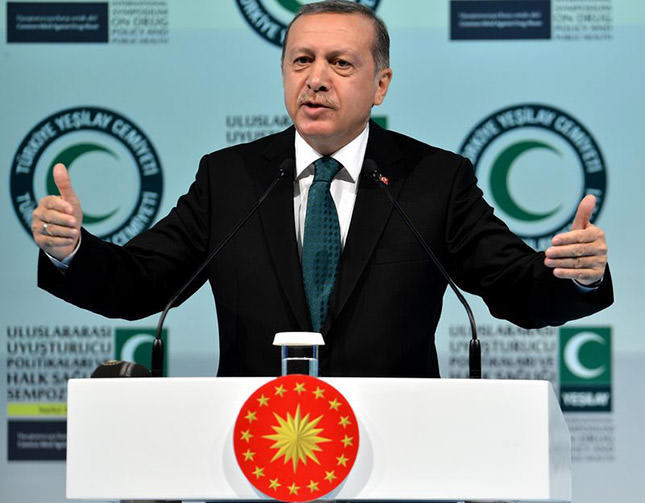 ISIS has nothing to do with Islam, but rather consists of militants who are drug addicts, Turkish President Erdoğan said, at an international symposium on counter-narcotics policies in Istanbul on Monday.

Erdoğan spoke at the International Symposium on Drug Policy and Public Health organized by the Turkish Green Crescent Society, the country's top teetotalling society. The three-day symposium opened yesterday, and is being attended by experts, academics and NGO officials from 50 countries.

Erdoğan said at the Symposium that drugs were a serious threat for society, especially for children and youth. He cited that 2.7 percent of population in Turkey admitted to using drugs at least once. "It is relatively low compared to other countries, but this figure tends to increase nowadays. I hope we will decrease it with newly-implemented laws and regulations and improvement of state agencies' efforts to contain the drug threat," he said.

The president said he was closely involved in the fight against drugs during his tenure as prime minister for 12 years. "With my fellow ministers, I coordinated steps to be taken against drugs. I assure that this issue will always be on my agenda during my term in the presidential office. I will remain as one of the most fierce fighters against drugs," he said.

Erdoğan said that drug use was a culmination of spiritual, familial and financial problems of the user as well as "incentives" gained by those receiving revenues from drug sales.

"We live in a time in which moral values are trampled by materialism. Not only Islam but all other religions are subject to an assault by materialism. Even non-religious systems based on traditions, cultures and social solidarity suffer from this assault that attempts to erode morals, mutual respect and tolerance. We are going through a process where money, greed and cruel competition trample moral values. We witness humanitarian values being replaced with these. Unfortunately, replacing a spiritual value with a materialistic value cannot satisfy people," he said. Erdoğan said this is the point where drugs come into play. "Those who lost their cause, ambition, ideals [and] values feel [they are] in a void and turn to numbing themselves. These children left isolated, unloved, unguided, try to fill their spiritual void with other things such as drugs, violence and terrorism," he added.

Referring to a European Court of Human Rights (ECHR) ruling that called on Turkey to lift its compulsory religion and moral values courses, Erdoğan said the verdict was wrong. "You will never see a debate over compulsory physics, mathematics or chemistry lessons, but for some reason, religion classes are always debated. If you lift compulsory religion and ethics classes, drugs, violence and racism will fill the void," he said.

He said that people debate those courses while they complain from drug addiction, terrorism, violence, racism, anti-Semitism and Islamophobia.

He said Turkey cannot remain silent against drug barons. "I have seen many parents devastated by their children's drug and alcohol abuse. They lost their sons and daughters, they lost their affection. We have seen broken homes and murders [related to drug abuse]. We cannot just watch those lives fall apart and let drug barons and gangs take the lives of our youth. We are armed with a constitution authorizing us to take measures against drugs. Beyond that, we have a responsibility as human beings with a conscience. We will never fail to take measures," Erdoğan said.

Erdoğan said that Turkey does not have to go through the painful experience that other developing countries went through. "We have to adopt a different development model that will prevent a spiritual poverty while our country gains prosperity," he said, urging the government, Green Crescent, other nongovernmental organizations and the media to help encourage measures against drug abuse. "We have to save our youth from this plague of modern times," said Erdoğan.

He remarked that handling the issue from a law enforcement perspective was not sufficient and "a war at home" was needed. "Parents think their children will not turn to drugs but this is wrong. Families should join the fight against drugs. Most importantly, education at schools is needed. To be honest, the government during my term as prime minister failed to take sufficient steps on this aspect of the issue. We have to start our fight against drugs at school by changing the curriculum. The curriculum should be changed to teach positive sciences in the best way and to keep children away from drugs, violence, terrorism, racism and hate crimes," he said.

The Turkish government has announced a new plan to curb drug addiction in the country that would include a more effective ban and a nationwide awareness campaign. The Rapid Action Plan Against Drugs will be coordinated by several ministries to take steps against drug abuse, especially among high school youth. The plan aims to detect troubled youth with an inclination to drug abuse earlier and provide them with treatment.

A new bill that passed in Parliament recently had extended prison terms for drug peddlers, particularly convicts caught peddling drugs outside or near schools and those selling drugs to people under the age of 18.

Green Crescent Society officials say that a 2013 survey among students in Istanbul showed that 9 percent of 32,000 students in high schools took drugs.

Bonzai, a synthetic drug that is highly popular among Turkish youth, poses a major risk according to experts, as it is cheap and commonly sold with its makers taking advantage of legal loopholes by mixing legal chemicals with illegal ones in its production. A new blanket ban announced by Turkey's Ministry of Health will also prohibit the use of all substances with narcotic qualities.