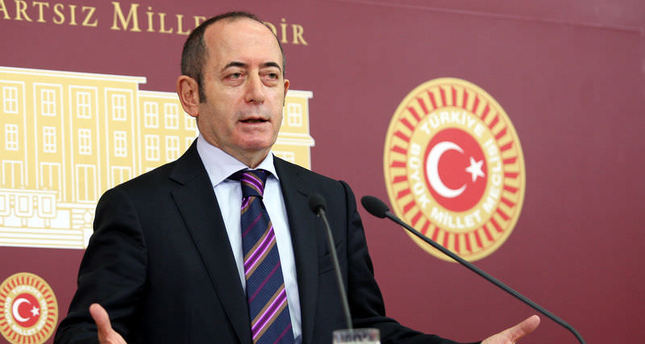 by Daily Sabah Sep 30, 2014 12:00 am
Turkey's main opposition Republican People's Party (CHP) Deputy Chairman Akif Hamzaçebi said that Turkey should be involved in the U.S.-led coalition to fight the Islamic State of Iraq and al-Sham (ISIS), which is a self-declared caliphate threatening the region, and called for staying out of military action.

Ahead of the two mandates seeking to send troops to neighboring Syria and Iraq, which is to be voted on this week, Hamzaçebi, in a news conference he held on Monday, made remarks over the main opposition's possible stance toward the ISIS threat.

"We do not know that ISIS will be described as a terrorist organization [through the mandate]," Hamzaçebi said, as the scope of the mandate is still unclear.

"Turkey is a significant country in the region. If Turkey is involved in military action against ISIS as part of the coalition, it will adversely affect Turkey's regional politics in the future," he said, stressing Turkey's location may result in problems for the country as the closest coalition member to ISIS-controlled territory.

"The U.S. and the other countries in the coalition will leave [the region], but Turkey will continue to live with [Iraq and Syria]. Of course, it is not a possibility to be a mere spectator to ISIS's brutality. Turkey must support the international coalition on this issue. But military action is an aspect that Turkey should not be involved in."

Hamzaçebi further said that Turkey should give support other than military action, implying intelligence sharing and humanitarian assistance.

Regarding the mandate that Parliament is to discuss in the coming days, Hamzaçebi said the CHP's stance toward the mandate over Iraq and Syria will depend on its content.

The Parliament will open on Oct. 1 and is expected to discuss a mandate authorizing the sending of troops into Syria and Iraq for a year if needed. The scope of the mandate remains unclear.
Last week, President Recep Tayyip Erdoğan announced that Turkey will be in full cooperation with the anti-ISIS coalition right after his visit to the U.N. Security Council held in New York.

Sources close to the government said that Ankara pushed for a safe zone and no-fly zone on its border in exchange for allowing the coalition to use Turkey's İncirlik base for combatting ISIS.