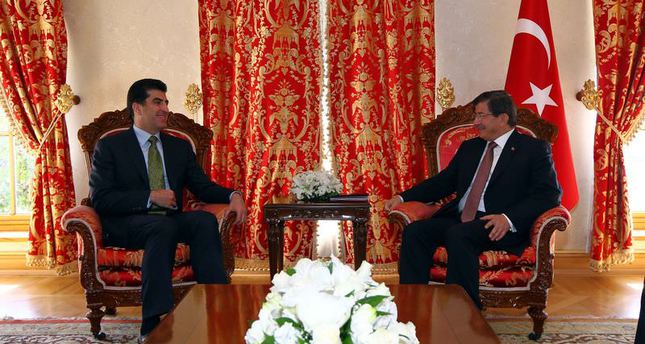 by Daily Sabah Sep 30, 2014 12:00 am
Turkish Prime Minister Ahmet Davutoğlu held a critical meeting with Kurdistan Regional Government (KRG) Prime Minister Nechirvan Barzani yesterday to discuss the ongoing crisis with the Islamic State of Iraq and al-Sham (ISIS). Following Turkey's involvement in the U.S.-led coalition, which is in armed conflict with ISIS, the two met to discuss ways of stopping the terrorist group's growing presence in the Middle East, especially Syria and Iraq. It was the first time the two met since Davutoğlu became prime minister late last month.

In a closed-door meeting, Barzani, who arrived in Turkey to attend the World Economic Forum held in Istanbul, shared intelligence with Davutoğlu regarding the ISIS advance in Iraq and Syria, and discussed to what extent the KRG will support the U.S.-led military coalition and what kinds of steps may be taken to address the crisis.

Another issue on the agenda of the talks was the reason why Barzani did not send troops to the border town of Ayn al-Arab - known as Kobani in Kurdish - which is currently the scene of heavy clashes between ISIS and Kurdish forces.

A week before the Davutoğlu-Barzani meeting, the KRG prime minister said during a press conference in the Dohuk governorate that the reason why the KRG did not send peshmerga forces to the city of Kobani was because of geographical obstacles. Barzani added that, if necessary, they will seriously consider sending peshmerga forces to the area.While ISIS continued to press its offensive against Syrian Kurds near Kobani, the militants have reportedly overrun scores of villages in recent weeks as they look to clear out one of the few remaining pockets of resistance to their rule in northern Syria.

A senior Kurdish fighter overseeing the defense of Kobani, Ismet Sheikh Hassa, said that ISIS militants were advancing on the city from three sides on Friday and were now launching mortars and rockets into Kobani itself. He said that Kurdish fighters were outgunned, using old Russian weapons and assault rifles to fend off the attack. "They have heavy weapons, including tanks, artillery and machine guns, Hassa said by telephone. "The Islamic State is randomly firing mortars and rockets over Kobani. There are numerous civilian causalities."

The refugee issue escalated after the ISIS advance into Kobani and has caused hundreds of Syrian Kurds to flee across the border to Turkey to escape the onslaught. The mass migration was also on the agenda between Davutoğlu and Barzani.

During the talks, Davutoğlu reportedly informed his Kurdish counterpart of Turkey's proposed steps to combat ISIS and what Ankara expects from the KRG to aid the process. Following the capture of the Iraqi city of Mosul by ISIS and the organization's increased terror threat, Turkey has faced accusations from the media claiming that Turkey is supporting ISIS by allowing militants and weapons to cross its border - a claim that has been strongly denied by the Turkish government.

Last week, Barzani talked about the accusations against Turkey, saying, "Turkey certainly did not support ISIS against Kurds or the Kurdish government. We believe that it is slander. Turkey is our important neighbor and has always helped the Kurdish region," he added. Also, Davutoğlu and Barzani discussed the adverse effects the ISIS threat has had on the countries' trade relations. Turkey and the KRG had a considerable trade relationship before the ISIS advance threated the region.

Turkey has a significant construction and retail presence in the KRG, but following the ISIS takeover, trade relations saw an involuntary decline.