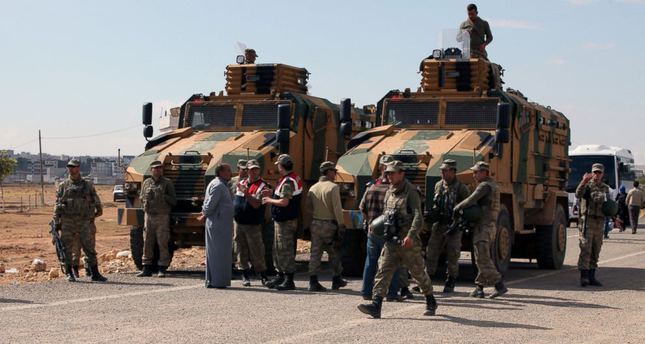 The Turkish government and high-ranking military officers yesterday discussed the mandate for the deployment of Turkish troops to turmoil-ridden countries Syria and Iraq. A comprehensive mandate was sent to the Parliament as the anti-ISIS coalition continues to strike the militant group

Following Turkey's involvement in the U.S.-led coalition to fight the Islamic State of Iraq and al-Sham (ISIS), the Turkish cabinet met yesterday to discuss all available options regarding the upcoming motion over the deployment of Turkish troops to Syria and Iraq. Deputy Prime Minister Bülent Arınç, speaking yesterday after the cabinet meeting, said a single comprehensive mandate on troop deployment outside Turkey's borders was submitted to Parliament. Arınç said the mandate would include a clear reference to terrorist groups that pose a threat, implying ISIS would be mentioned in the document. The Parliament, which will start its new legislative year today, will vote on the mandate tomorrow although the Turkish government is not likely to send troops beyond national borders as long as Ankara's conditions, including a safe zone along the border and a no-fly zone to ensure a secure area within and beyond Turkish borders, are not met.

First mentioning the idea of a no-fly zone on the Syrian side of the border more than two years ago, Ankara pushed its demands on the sidelines of the U.N. General Assembly in New York last week in exchange for taking a role in the anti-ISIS coalition.

The safe zone Ankara demands from the anti-ISIS coalition will reportedly be secured by two Turkish brigades, some 10,000 members of the army, and another brigade will be kept on the Turkish side of the border for possible reinforcement of the safe zone where Syrians and Iraqis fleeing ISIS violence will be staying.

Fighter jets and unmanned aerial vehicles at the Malatya, Batman and Diyarbakır military airports will regularly observe the region and provide assistance to the troops on the ground. Furthermore, helicopter units will be present at the border for possible intervention on the other side of the border.

Chaired by Turkish Prime Minister Ahmet Davutoğlu, the main agenda of the cabinet meeting was the content of the mandate to combat the growing ISIS threat, the security of Turkish borders that have witnessed continued influxes of refugees since the beginning of the Syrian civil war in 2011 and cross-border operations to be carried out by Turkey as a member of the anti-ISIS coalition. High-ranking military officers including Chief of General Staff of the Turkish Army Gen. Necdet Özel, Air Force Commander Gen. Akın Özturk, Land Forces Commander Gen. Hulusi Akar, Deputy Commander of the General Staff Gen. Yaşar Güler and head of the Operations Department of the General Staff Lieutenant Gen. Erdal Özturk compared their notes at the meeting. A report by Gen. Özel was submitted to the cabinet members and Gen. Akar shared his experiences from the border during the meeting, according to Turkish media outlets.

As Ankara deals with a busy schedule to give the mandate its final form, ISIS advances within the clear sight of the Turkish army is leading the government to take a clearer position against the insurgents as part of the anti-ISIS coalition.

Turkey shares a 900-kilometer-long border with Syria and has been skeptical to take a frontline role in the anti-ISIS military action due to possible terrorist attacks.

Another reason behind Turkey's unwilling stance was Ankara's sensitivity in its rhetoric due to the 49 hostages taken from the Turkish Consulate in Mosul, Iraq by ISIS militants. Once their return was secured through an operation carried out by the MİT on Sept. 20, Turkey clarified its position by taking part in the anti-ISIS coalition.

Ahead of the submission of the mandate, opposition parties in Parliament sparked a controversy. People's Democratic Party (HDP) Group Deputy Chair Pervin Buldan said that the HDP will vote "no" to the mandate over Turkish deployment in Iraq and Syria. The Nationalist Movement Party (MHP) announced that it is opposed to having foreign soldiers deployed in Turkey and the main opposition Republican People's Party (CHP) announced their support for Turkey's involvement in the anti-ISIS coalition but oppose Turkish boots on the ground.

Turkish Foreign Minister Mevlüt Çavuşoğlu while in New York remarked on the mandate following the statements from opposition parties. Calling all parties to refrain from turning the mandate into a domestic politics issue and to show the required sensitivity, Çavuşoğlu said the mandate are not about the Justice and Development Party (AK Party), but rather Turkey's security and stability.