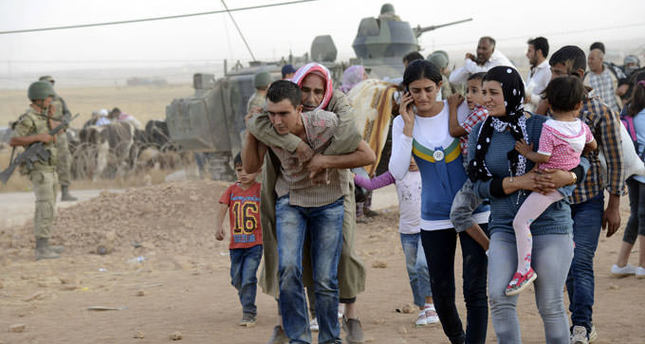 by Sep 30, 2014 12:00 am
On Tuesday, one of the leaders of a Turkish pro-Kurdish party crossed the border to visit the Syrian town of Ain al-Arab, which has been besieged by Islamic State of Iraq and al-Sham (ISIS) militants, calling for urgent action by Turkey against the insurgents.

Selahattin Demirtaş, a co-leader of the People's Democratic Party (HDP), who came third in the presidential election race in August, also met a senior Syrian Kurd leader in the town known as Kobani in Kurdish.

Ain al-Arab – just a few kilometers south of the Turkish border – has been besieged by ISIS militants for days, provoking an exodus of some 160,000 refugees into Turkey.

"We crossed into Kobani and held a meeting with the Democratic Union Party (PYD) co-chair," Demirtaş said, referring to a Syrian Kurdish party and declining to give the name of the official.

"There were ISIS terrorists just two kilometers away. Kobani has been besieged by ISIS militants from all sides," he said after returning to Suruç on the Turkish side of the border, in comments broadcasted on national television.

Demirtaş did not indicate how close to the center of the town he had been.

Turkey, after months of caution in the fight against ISIS, has decided to harden its policy, and Parliament is set to authorize military action against the militants this week. However, what this may entail is so far unclear.

Around 50 Turkish tanks have been deployed on the border crossing of Mursitpinar as well as weapons including artillery, an AFP correspondent said. Demirtaş called for strong action against ISIS from the Turkish government, saying this would help the peace process at home with outlawed PKK militants who have waged a 30-year insurgency against Turkey but have largely observed a cease-fire since March 2013. Kurds have been infuriated by the reluctance of the government to let Kurds cross the border back into Syria to join the fight against ISIS.

"Turkey can minimize the disappointment among its citizens only if it takes action," Demirtaş said.

"If everyone joins forces, no one can defeat a people who are championing a legitimate cause," said Demirtaş, who will hold talks with Turkish Prime Minister Ahmet Davutoğlu on Wednesday.

"Everyone should know that if ISIS enters Kobani, we will never accept their victory," he added.