Reconciliation road map to be updated despite provocations 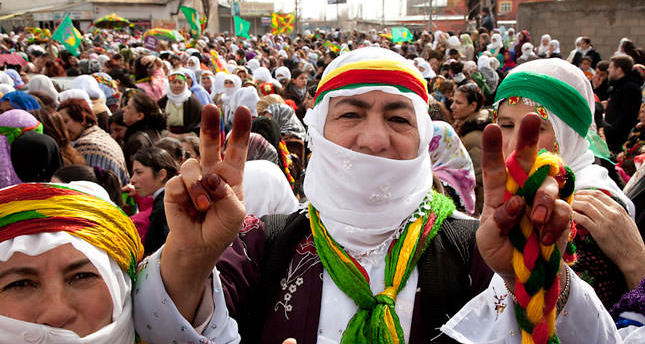 by Daily Sabah Sep 30, 2014 12:00 am
Continuing its determination for the reconciliation process between Ankara and Kurds that started with Justice and Development (AK Party) initiatives, the Turkish government reportedly updated the road map to be announced in October with an aim to end the decades-long conflict in southeastern Turkey.

Turkish Prime Minister Ahmet Davutoğlu is expected to hold a meeting with People's Democratic Party (HDP) Chairman Selahattin Demirtaş, and in the previous days held a three-hour meeting with a HDP committee and urged the committee to refrain from raising tensions in southeastern Turkey. "Do not tolerate opportunism. If you want to see this reconciliation process working, do not take a side step," Davutoğlu warned the HDP. As the number of Syrian Kurdish refugees fleeing the Islamic State of Iraq and al-Sham (ISIS) threat in the border town of Kobani continues to grow, Turkish security forces have encountered provocations by some pro-Kurdish politicians on the border.

An independent deputy from Van, Aysel Tuğlak, escalated tension by throwing a stone at Turkish soldiers in the southeastern city of Suruç where the fleeing Syrian Kurds were accommodated in temporary refugee camps and registered by the Turkish Disaster and Emergency Directorate (AFAD).

The security forces who tried to regulate the refugee influx also faced a reaction from a group attempting to cross the border into Syria to fight against ISIS. During the incident, tension rose between politicians and the security forces when provocateurs tried to use outlawed PKK symbols. Feeling discomfort with the escalated tension in the region, Davutoğlu addressed the HDP committee: "This attitude toward our soldiers is unacceptable considering the latest situation in the region. Throwing a stone at a soldier is unacceptable. You are undermining the [reconciliation] process. " While discussing the strategies to combat the ISIS threat and organizing Syrian Kurds who crossed into Turkey to meet their basic needs, Ankara has been trying to implement sensitive diplomacy to prevent any harm to the process. Amid the provocations, it was reported that a HDP committee paid a visit to PKK leader Abdullah Öcalan, who is serving life imprisonment on Turkey's İmralı Island.

The Turkish National Intelligence Organization (MİT) also paid a visit to Öcalan. As part of talks with the PKK leader, he is expected to publish a statement regarding the latest developments of and provocations against the process.

Last week, officials from the outlawed Kurdish Communities Union (KCK), an umbrella organization of the PKK, said that the reconciliation process had died on the vine as the organization and PKK's second in charge, Murat Karayılan, declared the cease-fire had "ended" in an interview with a TV station close to the PKK this week.