Tanks on border as Parliament readies to discuss troop mandate 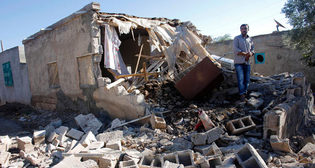 Speaking at a press conference held yesterday afternoon, Speaker of Parliament Cemil Çiçek said that two mandates seeking to send troops to neighboring Syria and Iraq will likely be received by Parliament on Tuesday and will be voted on during the week. The statement came through when Turkish tanks and armored vehicles took up positions on a hill overlooking the besieged Syrian border town of Kobani on Monday as shelling by Islamic State of Syria and Iraq (ISIS) militants intensified and stray fire hit Turkish soil. "We don't know what [the mandates] include. As far as I know, the Justice and Development Party [AK Party] government is planning to pass them before the Eid al-Adha holiday [on Saturday]," Çiçek said. At least 15 tanks were positioned, some with their guns pointed toward Syrian territory, near a Turkish military base just northwest of Kobani. Plumes of smoke rose as shells hit both the eastern and western sides of Kobani.

More tanks and armored vehicles moved toward the Syrian border after at least two shells hit Turkish territory on Monday. The military said earlier it had fired back on Sunday after two mortars crossed the border. According to government officials, the Turkish Parliament will discuss the motion on Thursday to extend a mandate authorizing the sending of troops into Syria and Iraq for a year if needed.

Ankara also said that the new motion will be broader than the previous one as it will include the creation of a safe zone along Turkey's border with Syria and Iraq. As Turkish President Recep Tayyip Erdoğan announced last Tuesday at the U.N. General Assembly that Ankara supports the U.S.-led coalition against ISIS both militarily and politically, he pushed for the establishing of a safe zone for refugees to ensure a secure area within and beyond Turkish borders. He also clarified that he was against direct engagement between Turkish troops and ISIS.

The safe zone that Ankara demands from the anti-ISIS coalition will reportedly be secured by two Turkish brigades, around 10,000 members of the army, and another brigade will be kept on the Turkish side of the border for possible reinforcement of the safe zone where Syrians and Iraqis fleeing ISIS violence will be staying.

Fighter jets and unmanned aerial vehicles at the Malatya, Batman and Diyarbakır military airports will regularly observe the region and provide assistance to the troops on the ground. Furthermore, helicopter units will be present at the border for possible intervention on the other side of the border.

Erdoğan recently said that Turkey would defend its border if necessary and added that the necessary steps would be taken once a parliamentary mandate is passed next week that enables Turkish troops to conduct operations outside its borders. Prime Minister Ahmet Davutoğlu told the press on Sunday that his government will expand the scope of the mandates on their way to Parliament. "After sending the mandates we'll hold a broader meeting with the president," he said.

Clarifying Ankara's position, Erdoğan said, "The Turkish army could be used to help set up a secure zone in Syria if there is an international agreement to establish such a haven for refugees fleeing ISIS militants. The logic that assumes Turkey would not take a position militarily is wrong."

Erdoğan said that negotiations are underway to determine how and by which countries the airstrikes and a potential ground operation would be undertaken and that Turkey is ready to take part. "In the distribution of responsibilities, every country will have a certain duty. Whatever is Turkey's role, Turkey will play it," he said, adding that an air operation alone was not sufficient. "You can't finish off such a terrorist organization with airstrikes alone.

Ground forces are complementary [...] You have to look at it as a whole. Obviously I'm not a soldier, but the air operations are logistical. If there's no ground force, it will not be permanent," he said. "No one is responsible for protecting your borders. Will other people come and protect them? We are the ones who will protect our own borders," he said.

It is anticipated that the number of fleeing Syrians will surpass 1.5 million after the latest airstrikes on ISIS in Syria and Iraq. Other matters are being brought to the forefront in the resolutions such as the resulting chaos, national security and sensitivity of the safety of Syrian and Iraqi refugees.