Turkey will not be exploited by other countries, President Erdoğan says 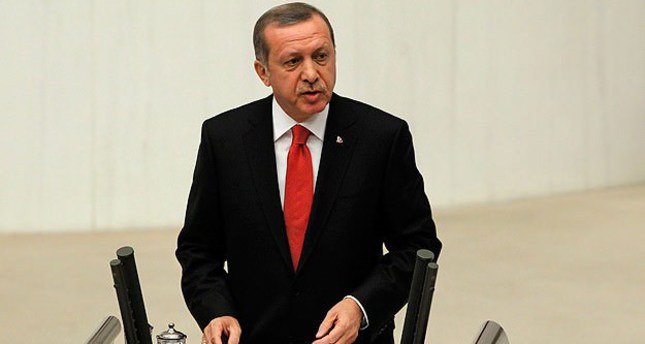 by Daily Sabah with Agencies Oct 01, 2014 12:00 am
President Recep Tayyip Erdoğan on Wednesday has delivered the opening speech of the legislative session at the Turkish Parliament and touched upon a number of important issues and has expressed that the New Turkey will be a place where all citizens feel at home and are not marginalized for their ethnic, or religious backgrounds.

"Immediately subsequent to the 2015 elections, all parties in the parliament should free themselves from prejudice and come together to write a new constitution based on reconciliation," Erdogan said in a speech at the opening of parliament.
"What will make the new Turkey stronger and provide a strong foundation for the country is a new constitution that corresponds with the new Turkey," he said.

A new constitution has long been one of Erdogan's key promises, meant to replace a text born of a 1980 coup which, despite numerous revisions, still bears the stamp of military tutelage.

The President has also expressed everyone should know that Turkey is open to all sorts of cooperation initiatives to fight the ISIS and terrorism in the region, but should also be aware that it will not let others exploit Turkey's role in the situation.

"The fight against the self-proclaimed Islamic State of Iraq and al-Sham (ISIS) and other terrorist organizations in the region will be a priority for Turkey" Erdoğan stated, expressing what happens in the region directly affects Turkey while he remarked great countries do not close their borders to other states. He expressed that it was unacceptable to think that Turkey showed sympathy towards a terrorist organization while he stated that the removal of the authoritarian Assad regime and the territorial integrity of Syria will be a priority for Turkey. He noted that Turkey has spent four billion dollars in humanitarian aid for the refugees in Turkey and 4.5 billion dollars across the border while it has opened its doors to over 1,5 million Syrian refugees. Criticizing the international community for its silence over the crisis in the Middle East and the suffering of the people, Erdoğan panned the permanent five states of the United Nations. "As new and great crises' are taking place in our region that involves our Muslim, Arab, Kurdish, Turkmen brothers, and since both sides of our borders are inhabited by our relatives, it is unthinkable for us to remain indifferent or tentative". Erdoğan stated.

Touching upon the significance of conducting protests and demonstrations under the framework of laws and the constitution as being an indispensable part of democracies, Erdoğan stated that the attempts to overthrow democratically elected governments through such means is not acceptable.

"In the new Turkey, there is no such thing as desired and undesired, all citizens are equals" said the President, expressing that the treconciliation process is mandatory for Turkey's stability, brotherhood and democracy, while noting that the government fully supports the process as no parent would want their children to die. Likewise, he noted that the increasing respect paid for cultural identities has made Turkey a more peaceful country to live in, while improved standards of democracy and freedoms have reinforced Turkey's brotherhood as a nation.

Explaining that the new Turkey will not allow mafia-like shadowy organizations to infiltrate into state institutions, Erdoğan stated that the state has won over the Gülen Movement which was evident by the expression of the national will on the local elections of March 30 and the presidential election on August 10. Likewise, he noted that full membership of Turkey to the European Union is a crucial strategic goal for the country.