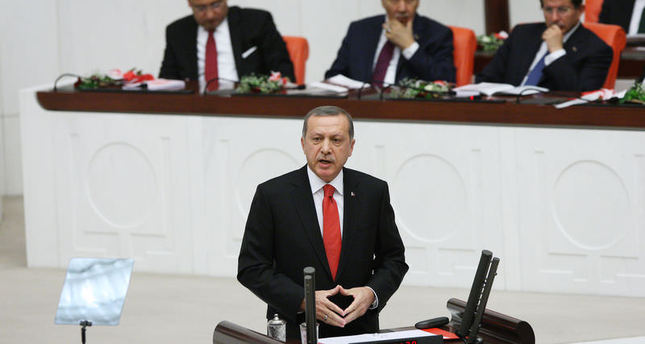 by Daily Sabah Oct 01, 2014 12:00 am
President Erdoğan dismissed the claims that ISIS has encircled Suleiman Shah Tomb, a sovereign exclave of Turkey situated in the Syrian town of Aleppo that is guarded by Turkish soldiers.

At the year opening reception of Turkish Parliament on Wednesday Erdoğan said that the claims are absolutely untrue. Erdoğan also said that any possible attack on the Tomb would draw a response that would be clear and certain.

Erdoğan also commented on the motion which would authorize Turkish troops to intervene in Iraq and Syria to fight against ISIS, saying, "I support the motion, Turkey should take action against the ISIS threat and I hope the Turkish Parliament will show its support on as well."

The Turkish Parliament will vote for the mandate in an open session on Thursday.