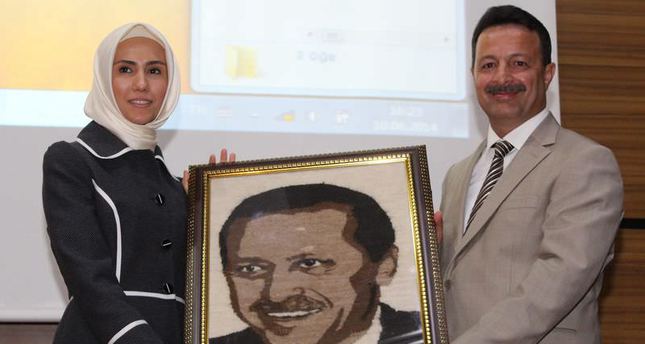 by Daily Sabah Oct 01, 2014 12:00 am
Turkish President Recep Tayyip Erdoğan's youngest daughter Sümeyye Erdoğan has resigned from her post as adviser to the vice-president of the AK Party, a task she has been carrying out for 4 years without remuneration. Taking leave of her duties, Erdoğan declared her pride in her role at the party, stating she now intends to concentrate on her extracurricular NGO activities.

The 29-year-old has faced a series of challenges during her school years due to the headscarf ban in Turkey and eventually went to study in universities in the USA and the UK with full scholarships. The youngest of President Erdoğan and Turkish First Lady Emine Erdogan's four children, she assumed the duties of adviser to the vice-president of the Peace and Development Party during her father Recep Tayyip Erdoğan's term as the Prime Minister of Turkey. During this period, she was a frequent target of smear campaigns launched against her, including accusations of a rumored 25,000 euro salary, although Erdoğan had officially declared on numerous occasions that she did not receive a salary. Another attack claimed she was laying the groundwork for a political career.

Considering her father's rise to the Turkish Presidency as of August 28th, there is much interest in Sümeyye's next career move. Erdoğan currently owns a grilled-foods company.