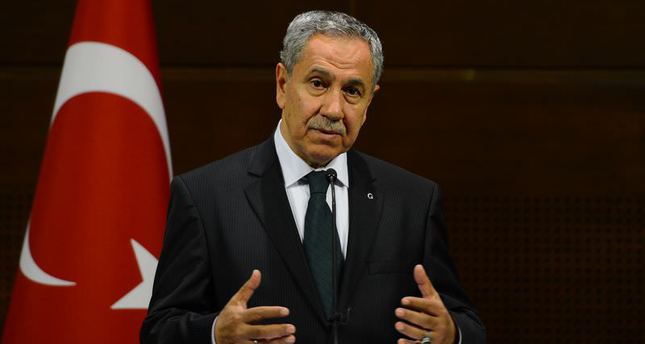 by Daily Sabah Oct 01, 2014 12:00 am
Deputy Prime Minister Bülent Arınç has announced on Tuesday that the government has established the "Reconciliation Process Committee" in efforts to draw a roadmap for the steps and precautions that will be taken by the government and for the development of effective strategies and policies to put a permanent end to terrorism in the country.

Arınç expressed the details of the committee following a cabinet meeting on Tuesday chaired by Prime Minister Ahmet Davutoğlu and stated that the committee would be led by the Prime Minister or a Deputy Prime Minister, and its members would include the minister of justice, foreign affairs, minister of the interior, national defense minister, undersecretary of the prime ministry and the National Intelligence Organization and several other ministries. It was reported that other ministers and public officials may be invited to committee meetings in accordance with their content and needs.
According to Arınç, the duties of the committee include establishing the strategies and policies which will be utilized by the government, while it will also keep an eye on the procedures, evaluate them and establish the necessary coordination between relevant institutions and organizations, determine the responsible institutions and evaluate draft reports, take necessary precautions and make decisions on a number of issues. More importantly, series of Inter-Committee Follow up and Coordination Commissions will be established with the participation of senior representatives from relevant institutions and these commissions are expected to prepare reports and action plans to be presented to the reconciliation committee. Likewise, these commissions will be entitled to cooperate with relevant non-governmental organizations, local administrations and vocational institutions whereby necessary.

Turkey's National Intelligence Organization (MİT) has paid visits to PKK leader Abdullah Öcalan who is serving a life sentence in İmralı Prison while last week officials from the outlawed KCK have expressed that the reconciliation process had died and Murat Karayılan –who is in charge of PKK- in a televised interview has recently claimed that the ceasefire had ended.

The AK Party government has initiated the reconciliation process to bring a permanent solution to the country's 30-year old conflict between the outlawed PKK and the Armed Forces and has put an end to violence through a series of democratic reforms and economic investments to boost stability in the region.