Turkey calls on world to help with Syrian refugees 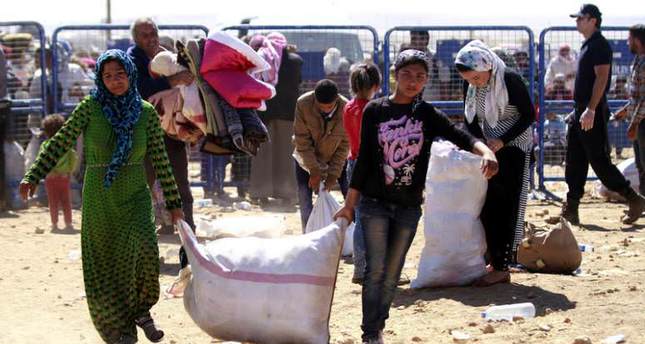 by Daily Sabah with Agencies Oct 01, 2014 12:00 am
Turkey has called on the international community to help the country cope with the flood of refugees fleeing the Syrian civil war. Speaking at the World Economic Forum in Istanbul on Monday, Interior Minister Efkan Ala said: "Within the last week more than 150,000 mainly Kurdish refugees took shelter in Turkey. "We spent $4 billion (TL 9 million), the U.N. has spent $160 million on aid [in Syria] and other countries in total spent $244 million on aid. This is nothing." Ala criticized Western policy in the Middle East claiming they bear responsibility for the emergence of terrorist groups such as the Islamic State in Iraq and al-Sham (ISIS) that "threaten humanity and the West."

Turkey has taken in more than 1.5 million Syrian refugees since the war began in 2011. Turkey has spent more than $3.5 billion on helping Syrians since the civil war broke out in 2011.

Reiterating that Turkey has spent over $3.5 billion on Syrian refugees, the Turkish president said that a buffer-zone is urgently needed in the region.Over the last couple of weeks, Turkey saw a huge influx of Syrian Kurdish refugees fleeing from Kobani where ISIS's advancement has threatened the local community. According to Turkish authorities, the number of Kurdish refugees has exceeded 170,000 since the opening of the border on Friday, Sept. 19.