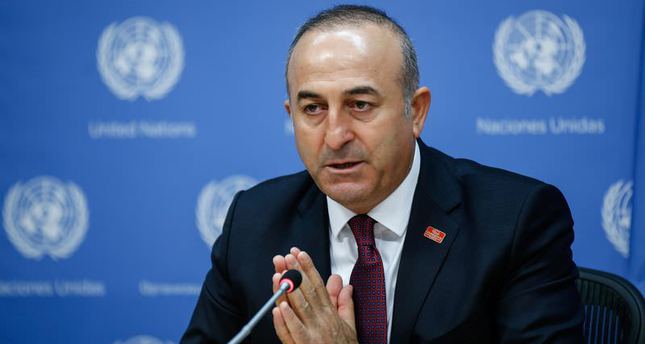 by Daily Sabah Oct 01, 2014 12:00 am
Turkey is confident in its bid for a non-permanent seat on the U.N. Security Council (UNSC) in the 2015-2016 elections, Turkish Foreign Minister Mevlüt Çavuşoğlu announced on his Twitter feed Tuesday.

"Turkey will continue to serve world peace and security," Çavuşoğlu said in his tweet.

The UNSC is the most important target of Turkish foreign policy this year. Turkey declared its candidacy for a non-permanent seat in the influential body in 2011. After its time in a non-permanent seat on the UNSC in 2009-2010, Turkey's announcing its candidacy again stems from the country's determination to increase its contribution to world stability, prosperity and international peace.

Çavuşoğlu attended the meetings held at the UNSC in New York during which he informed the relevant representatives of various countries about crucial roles Turkey can play in world peace and asked for the countries' support for Turkey's membership.

Turkish President Recep Tayyip Erdoğan criticized the current structure of the UNSC, where veto-wielding powers are held by the five permanent member countries. During last week's UNSC meeting Erdoğan said, "The world is bigger than five. It is unacceptable that only five countries render the U.N. ineffective regarding the developments in the world," referring to the failure of the UNSC to place sanctions on the Syrian regime and for not finding a solution in Palestine where more than 2,000 people were killed in 51 days of Israeli attacks.

Russia, the staunchest ally of the Bashar Assad regime in Syria and China have used their veto power a number of times on draft proposals that sought military sanctions on the Syrian regime if it continued to commit violence. "It is so obvious that this silence, despair and inaction should not last any longer. Quicker and more effective mechanisms should be formed for the solution of global and regional problems and the U.N. should act bravely when it comes to defending that right," Erdoğan said.