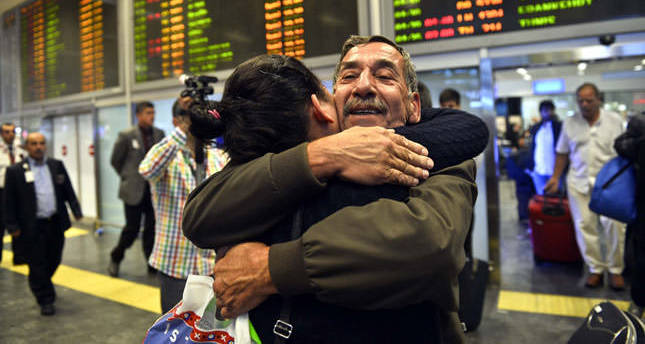 Close to 400 Turkish construction workers, who were trapped in the southwestern city of Ghat for six days due to clashes between two tribes squabbling over share in oil profits, were airlifted by the Foreign Ministry

Three-hundred-ninety-six Turkish citizens who worked for a construction company in Libya have returned home following tension escalated in the city of Ghat between two tribes who clashed over their share of oil.

A statement issued by the Turkish Foreign Ministry on Monday said that the Turkish workers have been trapped amid armed clashes in Libya for the last six days at the airport in Ghat, located in the southwestern Fezzan region and that the ministry started taking all measures to safely bring them to Turkey.

Hours after the statement, the Turkish citizens arrived in Istanbul on Monday night on a Turkish Airlines flight from Misrata, a city in northwest Libya.

The manager of the construction company ENKA, İsa Özinan, said that his firm has five building sites in different places in the capital of the Wadi al-Hayaa district of the town of Ubari in southwestern Libya. He added that two weeks ago two tribes started fighting over their share of oil and the security situation in the region started deteriorating.

Özinan continued, "We decided to evacuate from the region upon receiving news of the conflicts and closed the construction sites. We also rushed to leave and arrived at the Misrata airport."

"We arrived by bus from the airport, but our evacuation was postponed for nearly one week and we had to stay at the airport and hotels in Misrata."

Hakan Oyar, a Turkish citizen working for ENKA, said, "We could hear the conflict sometimes but did not see any fighting. No one forced us to leave the country, but now all Turkish workers have been brought [back] to Turkey."

Earlier on Sunday reports claimed that the number of trapped workers was 457, however this number has been denied by the ministry, which said workers are scheduled to be taken to Misrata Airport to be brought back home.

Turkish media outlets reported on Sunday that the workers are facing food and water shortages and that armed militants had seized their money, passports and cellphones.

Some workers who did not have their cellphones taken were able to communicate with their families in Turkey through text messages.

Three Turkish citizens were abducted in Libya in June and their release in July was secured by the Turkish Foreign Ministry as it was announced by then Foreign Minister Ahmet Davutoğlu.

In July, Turkey's foreign ministry warned Turkish citizens to leave Libya and to avoid travel to the country as the security situation has deteriorated in the country and remains unpredictable.

Benghazi has been the scene of mounting crime and militancy since the 2011 ouster and death of Moammar Gadhafi, the Libyan former dictator.

In May, Libyan general Khalifa Haftar declared war on armed militias based in eastern Libya vowing to purge the country of extremists. The Libyan government, for its part, has called the former general's campaign a coup. After serving as army chief of staff under Gadhafi, Haftar spent nearly two decades in the U.S. in exile before returning to Libya in 2011 to join the uprising against the long-serving autocrat.

Rival militias have frequently clashed in Libya's main cities, including the capital Tripoli and Benghazi, while the central government has struggled to maintain order. Political divisions have resulted in two rival seats of government, each with their own set of institutions.

The two assemblies are currently vying for legislative authority – a newly elected House of Representatives in the eastern city of Tobruk and a General National Congress, which continues to sit in Tripoli despite its mandate ending in August.