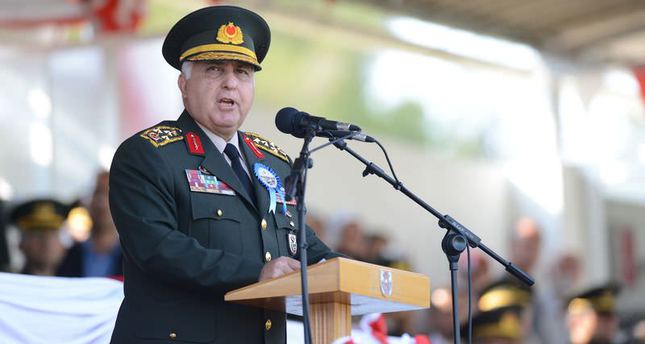 by Daily Sabah Oct 02, 2014 12:00 am
The Chief of General Staff, Necdet Özel, noting that there would be an instant intervention by Turkish Armed Forces (TSK) in case of an emergency at the outpost of Suleyman Şah Tomb, said TSK will deliver air-strikes within merely two minutes, upon receiving information that there is an ISIS threat in the enclave.

The statement came two days after a comprehensive mandate was sent to the Parliament as the anti-ISIS coalition continues to strike the militant group. Turkish cabinet met to discuss all available options regarding the upcoming motion over the deployment of Turkish troops to Syria and Iraq.

Özel made a presentation to the cabinet members during the discussion of the motion elaborating the plan of possible operations to protect Süleyman Şah tomb recognized as the only Turkish territory outside of Turkey. The operation to be conducted in case of an Islamic State of Iraq and al-Sham (ISIS) assault on the outpost in which 50 soldiers are on duty will reportedly have two stages. According to the plan, which is approved by the government officials; while the point shots will be carried out by howitzers, Turkish Armed Forces (TSK) will have an immediate response to any case of emergency, delivering air-strikes within a matter of minutes.

Özel also stated that the soldiers' logistic needs are sent to the outpost located 28 kilometers away from the Turkish border via land route, and the last delivery was a month ago. He added that the militants had not surrounded the tomb,yet the tomb was among the regions in the grip of the ISIS militants. The resources reveal that the region is perpetually traced by drones and measures are taken in case the militants encircle the tomb.

According to the resources of the foreign ministry, members of the coalition against ISIS including the US, began leaning towards establishing a no-fly zone as there is a need for a safe zone. The US especially has been mostly coaxed over the issue of forming a safe zone aiming to pave way for a stable administration to be established and order to be brought in the region. A safe-zone is also believed to obviate the refugee crisis in Turkey.

The resources highlight that establishing a safe zone does not necessitate a decision by the United Nations, but even so Turkey will refrain from one-sidedly announcing a region a safe-zone.

Chief of General Staff Necdet Özel also delivered an Eid al-Adha message addressing the soldiers who serve in the Süleyman Şah Tomb, and reassured that the TSK are with them at all times as there are rumors about ISIS militants surrounding the enclave.

"You are not alone and the Turkish Armed Forces will be at your side the moment we hear the news that you are under threat" said Gen. Özel, praising the soldiers and staff who are duly performing their duty at the tomb with utmost responsibility at a critical time as the threat of ISIS terrorism persists. "I have full faith that from now on you will continue to perform your duties with success and represent our nation and armed forces while preserving our honor and dignity" Gen. Özel stated.

Gen.Özel congratulated the staff's holidays and thanked them for their commitment.