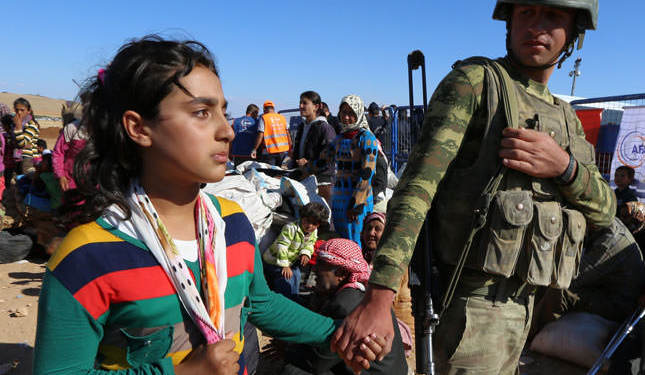 President Recep Tayyip Erdoğan, in his speech in Parliament yesterday for the beginning of the new legislative year, said Turkey could not remain indifferent to regional turmoil. The government on Tuesday submitted a motion to Parliament to expand the authorization to act against recent security threats in Iraq and Syria, which will be debated today. "Some may keep quiet over the regional crisis but Turkey cannot remain silent as such an action would be a denial of our history and ancestors," Erdoğan said. ISIS controls large territories in Iraq and Syria and has besieged the Kurdish town of Kobani in northern Syria from three sides, attempting to consolidate its control over the town and its surrounding villages.

As the threat grows by the day, the bombs by the U.S.-led coalition rained down on cities captured by ISIS.

ISIS's siege of Kobani caused a huge influx of refugees into Turkey – the highest single amount during the four year war – and Turkey has received more than 160,000 refugees since Sept. 19, which was the first day of the most recent mass exodus from Syria.

"The fight against ISIS and other terrorist organizations in the region will be a priority for Turkey," Erdoğan said, explaining that what happens in the region directly affects Turkey. He said that great countries do not close their borders to other states.

He said it is impossible for Turkey to show sympathy toward a terrorist organization and that the removal of the authoritarian Bashar Assad regime and the territorial integrity of Syria will be a priority for Turkey.

He said that Turkey is the third highest international donor in humanitarian assistance, referring to the refugee assistance Turkey has provided, adding, "Turkey does not question the religious sects of Iraqi and Syrian refugees [fleeing ISIS], but shelters them."

In his address in Parliament, there appeared to be an atmosphere of greater unity compared to previous sessions.

With the opening of the legislative session, Parliament is expected to have a busy week before Eid al-Adha starts on Saturday. According to officials, the mandate submitted by the government will be discussed in Parliament on Thursday.

The motive for the motion specifically cites the use of chemical weapons by the Syrian regime and the increasing security risks against the Tomb of Suleiman Shah, a late 12th century Seljuk leader, in a Turkish exclave near Aleppo, Syria, which was guaranteed by a 1921 treaty between Turkey and France.

If ratified by Parliament, the motion will authorize the Turkish government to take immediate action against any group threatening the country.

The motion also includes a mandate for the government to send Turkish Armed Forces (TSK) to foreign countries, for instance Iraq or Syria, if necessary. The motion is to last for a period of one year.

According to Deputy Prime Minister Bülent Arınç, discussion of the mandate may be held in a closed session and if the sessions are closed to the public, the mandate's minutes will not be released for 10 years.

Before the submission of the mandate, the Turkish Council of Ministers gathered on Monday to discuss all available options regarding the motion over the deployment of Turkish troops to Syria and Iraq with the attendance of high ranking military officials.

In Monday's meeting, military officials gave a report to the Cabinet over the country's border security. Reportedly, Chief of General Staff of the Turkish Army Gen. Necdet Özel said in the meeting that the priority is border security and gave the message that special forces are on full alert to protect the Tomb of Suleiman Shah.

A report including a course of action was also discussed at the meeting. Stressing how many international powers are required for the safe zone that Ankara demanded from the anti-ISIS coalition, Özel showed maps where ISIS is in Iraq and Syria, regions where Kurdish forces and ISIS have clashed and the areas where civilians reside.

The Cabinet and military officials compared notes on alternative plans and a possible road map. According to alternatives, the road map will be clarified in accordance with Turkey's national interests.

"While Turkey is discussing all options, the anti-ISIS coalition's stance toward Turkey's safe zone demand is still not clear. It is Turkey's preference that the safe zone is to be NATO-supported," the cabinet and military officials discussed.

One of the alternatives is that a safe zone may be established by the TSK and more than one zone could be established in critical regions of Syria. A detailed study is being carried out regarding the statutes, time schedule of the safe zone and the number of soldiers that need to be sent to protect it.

A possible economic burden of the safe zone on Turkey was also discussed at the meeting. Those at the meeting determined that the zone should be established before the winter.

Reportedly, possible provocative actions by ISIS and other terrorist organizations in the region were also on the meeting's agenda. According to the Cabinet and officials, the safe zone to be set up should not be long-term to prevent it from turning into a permanent accommodation unit. It was claimed that a safe zone may be set up in one or two months following the mandate.