PM: CHP to be remembered as ISIS supporter if votes against the motion 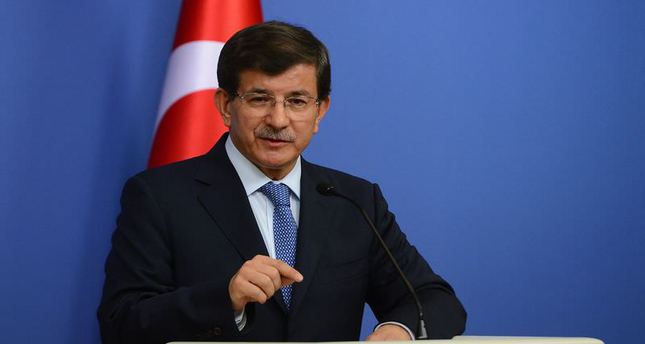 by Daily Sabah Oct 02, 2014 12:00 am
Turkish Prime Minister Ahmet Davutoğlu has said that The Republican People's Party (CHP) will go down in history as an ISIS supporter unless its members approve the motion seeking authorization to conduct military activities in Iraq and Syria.

"If CHP votes 'no' to the motion, history will remember the party as being on the side of ISIS" Davutoğlu was quoted as saying.

The members of the parliament are expected to vote for a government-sponsored motion seeking expanded authorization to act against recent security threats from Iraq and Syria on Thursday's session, two days after the motion was submitted to parliament.

Davutoğlu speaking to journalists at the reception held to celebrate the new legislative session, extended appreciation to the leader of opposition the Nationalist Movement Party (MHP), Devlet Bahçeli, for assenting to the motion.

CHP, on the other hand, exhibited its attitude towards the issue on Wednesday, said the party members opposed to Turkey's sending troops to Syria and Iraq thinking that it will adversely affect Turkey's regional politics in the future.

"Every party could have their own approach towards certain issues, which I absolutely respect but tomorrow CHP and HDP will be tested. We will see who is for and who is against ISIS tommorrow." Davutoğlu stated.

The growing threat of the self-claimed Islamic State of Iraq and al- Sham (ISIS) prompted government officials to take a major step towards the crisis. The vitality of solving the issue reached its peak as ISIS militants kidnapped Forty-six Turkish citizens - including diplomats, consular officials and their families - working for the Mosul consulate on June 11, a day after the self-proclaimed ISIS took control of Iraq's second-largest city. Although the return of the hostages was secured by the Turkish government through an operation the country's spy agency conducted, the threat lingers in the region for not just Syrians but also Turkish citizens as clashes take place in towns close to Turkish- Syrian border. Numerous mortar shells falling on Turkish territory in a week also revealed how critical the situation has become for Turkey.

The government officials now are seeking authorization to carry out military actions in Iraq and Syria not only to bar the harms the body causes to theTurkish nation but also to contribute to the coalition against a world wide threat by providing military support.

"If the leader of CHP, Kemal Kılıçdaroğlu, who kept pushing us to deliver a statement over the ISIS crisis while our hostages were held by the militants, says 'no' to the motion, it'll mean the party will be objecting to every move Turkey takes against threats of terrorist organization, be it ISIS or others in the future." Davutoğlu said, implicitly warning the main opposition leader.

"As to, HDP (People's Democratic Party), they too won't have the right to demand support for the Kurds fighting against ISIS in Kobani, if they vote 'no' to the motion. I'm warning these parties, especially Kılıçdaroğlu who will go down the history as an ISIS supporter, if he votes against the military involvement." Davutoğlu said, adding that the ruling party will constantly keep their flaw on Turkey's agenda.

"I was really sorry to hear that CHP was not for the motion. Neither, the Turkish nation nor the unfortunate Syrians fleeing ISIS violence will forget the outcome of this voting." Davutoğlu further added.