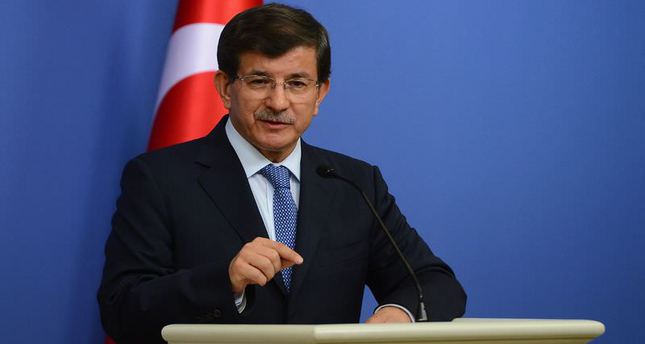 by Daily Sabah with AA Oct 02, 2014 12:00 am
Turkish Prime Minister Ahmet Davutoğlu has blamed a lack of cooperation between opposition groups in Syria for failing to stem the advance of extremist fighters.

Davutoğlu said the people of Kobani, a Syrian Kurdish city besieged by the Islamic State of Iraq and al-Sham (ISIS) for more than two weeks, were paying the price for the failure of the Kurdish Democratic Union Party (PYD) to join forces with the Free Syrian Army (FSA).

Speaking at Wednesday night's reception to mark the start of the new legislative year in Ankara, the Turkish capital, Davutoğlu said the government contacted the PYD and FSA last year and told them to act together to "avert the terror threat and regime attacks in the northern belt."

He added, "If the PYD, instead of cooperating with the regime, had joined forces with the FSA and with the opposition, ISIS would not have found that much opportunity in the field."

The attack on Kobani – just across the Turkish border – and surrounding villages has led to 160,000 refugees seeking sanctuary in Turkey.

Davutoğlu also addressed the motions to be presented to Parliament Thursday to extend the military mandate to deal with threats from Iraq and Syria.

He said he had told the co-chair of the Peoples' Democratic Party (HDP), Selahattin Demirtaş, not to block the motions. He also warned Republican People's Party (CHP) leader Kemal Kılıçdaroğlu to avoid standing "alongside ISIS."

The Turkish Armed Forces (TSK) are currently authorized to operate across the border to defend Turkey against PKK militants and the forces loyal to Syrian President Bashar Assad.

Thursday's session was originally scheduled to extend existing motions on Iraq and Syria that were due to expire on Oct. 4 and Oct. 17 respectively.

The PKK is listed as a terrorist organization by Turkey as well as by the U.S. and EU. Turkey has launched a reconciliation process to end a decades-old conflict with the PKK, which has claimed the lives of more than 40,000 people.