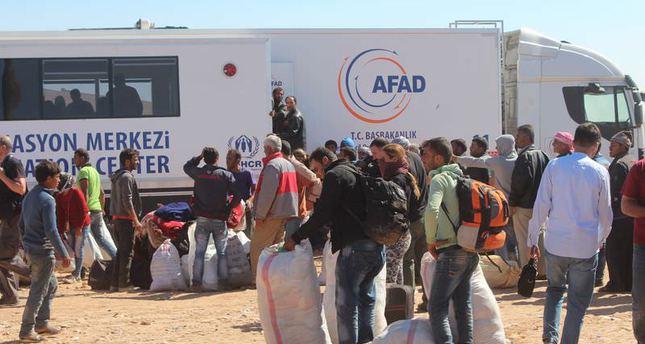 by Daily Sabah Oct 02, 2014 12:00 am
Turkey has been receiving very large numbers of refugees from Syria and Iraq since the civil war in Syria began almost four years ago. Beside this, the country has been witnessing the highest influx of refugees since last month with the number of refugees who fled to Turkey to seek shelter from the Islamic State of Iraq and al-Sham (ISIS) currently exceeding 160,000. With Syrians fleeing the destruction of the civil war the number of refugees in Turkey has exceeded 1.5 million. According to government officials the impact of refugees on Turkish coffers has exceeded $4 billion (TL 9.09 billion).

Amid this massive refugee influx, Turkey has strengthened its migration-related institutions to cope with the new emerging issues in the field of migration. Last year the Directorate General for Migration Management was established under the Ministry of Interior with a view to implement policies and strategies related to migration. Moreover, this year the directorate announced that they will hire 485 junior experts for its provincial branches to carry out the tasks and procedures related to foreigners' entry into, stay in, exit and removal from Turkey.

Meanwhile, the possibility of establishing a "Ministry of Immigration" to deal with immigration-related problems is also being discussed in political circles in Ankara. However, according to sources, the establishment of the ministry is not expected to be on the agenda until after the June 2015 general elections.