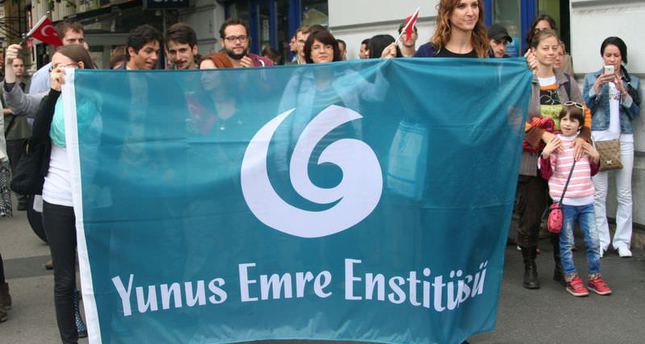 by Daily Sabah Oct 02, 2014 12:00 am
The Yunus Emre Foundation, dedicated to promoting Turkish culture globally with more than 30 centers in foreign countries, rejected the allegations that they were affiliated with the Islamic State of Iraq and al-Sham (ISIS), according to a statement released by the institute on Thursday.

"Recently, there have been some intentional and delusive articles and comments targeting and blemishing Yunus Emre Institute appearing on the media. The news and comments are totally untrue and aimed at denigrating the Institute," said the statement.

The Yunus Emre Foundation, with its 30 branches around the world, operate "within the framework of reciprocity and bilateral agreement", according to the statement. The main goal of the institute is to promote Turkish language, history, and art abroad and to build cultural bridges between the host countries and Turkey.

A similar kind of smear campaign has been also run against Turkish international aid agency, TİKA, to undermine the institution's credibility. TİKA last week dismissed the allegations that their cooperation activities in Kosovo were in any way linked with the ISIS militants.

The Turkish International Cooperation and Development Agency (TİKA), established in 1992, is responsible for contributing to poverty eradication and sustainable developments in 24 partner countries through its 26 coordination offices. Turkey shares its own expertise and experience for these countries by tailoring to fit their specific needs and developments.

Meanwhile, Yunus Emre Cultural Center in Egypt faces a closure threat, after Turkish President Recep Tayyip Erdoğan's criticism of the coup regime led by his Egyptian counterpart Abdel-Fattah el-Sissi at the World Economic Forum (WEF) held last week. Following Erdoğan's condemning speech, the Egyptian Foreign Ministry said, "The Turkish president is not in a position to give lessons to others about democracy and respect for human rights and appoint himself their guardian."

The deteriorating relationship between the two countries now constitutes a threat for the Yunus Emre Foundation in Egypt. Secretary General for the Coalition to Support Tahya Masr (Long Live Egypt) Fund, Tarek Mahmoud, declared Turkish cultural centers in the country as a "threat to national security", calling for its closure.

Turkish institutions "attract thousands of young Egyptians" to teach them Turkish language and are a part of a "wave of Turkish cultural invasion" to Egypt, Mahmoud said in his statement. The coalition put companies and products linked with Turkey on blacklist, including tourism companies organizing trips to Turkey, the statement said.