Parliament passes mandate to send troops into Iraq and Syria 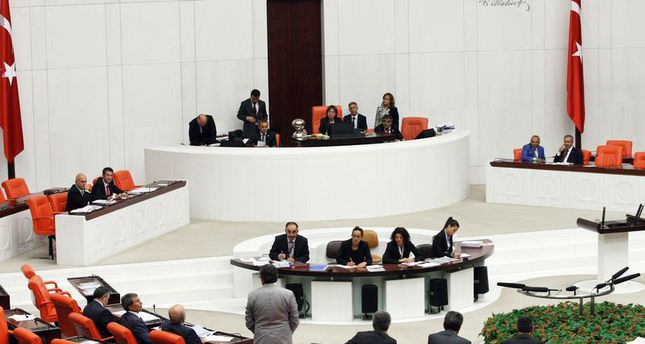 The Turkish Parliament on late Thursday has voted in favor of the deployment of cross-border troops to Iraq and Syria to fight ISIS and other terrorist organizations after an absolute majority voted yes for the motion while Turkey's main opposition Republican People's Party (CHP) voted against the mandate proposed by the government. A comprehensive mandate was submitted to the Parliament earlier as the anti-ISIS coalition continues to strike the militant group, 298 voted in favor and 98 voted against the motion.

As MP Faruk Loğoğlu spoke on behalf of the main opposition CHP, he criticized Turkey's cooperation with the U.S.-led coalition saying, "Turkey should not seek help from foreign soldiers, Turkey can protect itself."

Loğoğlu also said that CHP stands against a buffer zone imposed by the international community and stated that it would be a threat for Turkey.

The CHP on Wednesday had said party members opposed Turkey sending troops to Syria and Iraq thinking that it will adversely affect Turkey's regional politics in the future.

"Every party can have their own approach toward certain issues, which I absolutely respect, but tomorrow the CHP and HDP will be tested. We will see who is for and who is against the Islamic State of Iraq and al-Sham [ISIS] tomorrow." Davutoğlu stated.

Vahdettin İnce, a Kurdish author and political analyst, assessed the CHP's opposition to cross-border military action against ISIS as irresponsible. İnce stressed that the opposition party is unable to put aside its personal battles with the ruling party and acts unreasonably regarding the issue. He said all political parties should cling together when it is the nation's security on the line.

"When a certain threat knocks on your door you should leave behind your own interests. It is wrong to oppose everything the ruling party proposes," İnce said.

He also commented on the MHP's approval of sending troops across borders in case of an emergency. He claimed the MHP's approving of the motion is not "goodwill" either as it derives from the extreme nationalist ideology of the party.

The growing ISIS threat prompted government officials to take a major step toward taking action. The vitality of solving the issue reached its peak as ISIS militants kidnapped 49 staff including diplomats, consular officials and their families working at the Turkish Consulate in Mosul, Iraq on June 11, a day after ISIS took control of the city. Although the return of the hostages was secured by the Turkish government through an operation by the National Intelligence Organization (MİT) the threat lingers in the region for not just Syrians but also Turkish citizens as clashes take place in towns close to the Turkish-Syrian border. Numerous mortar shells that fell in Turkish territory recently also revealed how critical the situation has become for Turkey.

Government officials are now seeking authorization to carry out military actions in Iraq and Syria not only to prevent ISIS from harming the Turkish nation but also to contribute to the anti-ISIS coalition by providing military support.

PM Davutoğlu had earlier implicitly warning the main opposition leader said, "If the leader of the CHP, Kemal Kılıçdaroğlu, who kept pushing us to deliver a statement over the ISIS crisis while our hostages were held by the militants, says 'no' to the motion, it'll mean the party will be objecting to every move Turkey takes against the threats of the terrorist organization, be it ISIS or others in the future."

"As for the HDP, they too won't have the right to demand support for Kurds fighting against ISIS in Kobani if they vote 'no' to the motion. I'm warning these parties, especially Kılıçdaroğlu who will go down in history as an ISIS supporter if he votes against military involvement," Davutoğlu said, adding that the ruling party will constantly remind them of their opposition.

"I was really sorry to hear that the CHP was not for the motion. Neither the Turkish nation nor the unfortunate Syrians fleeing ISIS violence will forget the outcome of this vote," Davutoğlu said.

Professor Talip Küçükcan, a Middle East expert from Istanbul's Marmara University, said the decision by the CHP to oppose military action in Iraq and Syria stems from its stable foreign policy in which the party never favors being involved in affairs that go on outside Turkey's borders. The policy of the CHP adopted long ago toward outsiders is what led to its opposition to the issue. Küçükcan accused the CHP of being unable to spot risks and added that accepting the motion does not necessarily mean going to war.

"It is also contradictory that the CHP gives a cold shoulder to the rising threat of ISIS given that it has long been accusing the government of being supportive of ISIS militants. Now, when it comes to taking a move toward fighting against it, the party steps back, which just doesn't make sense," he added.

He attributed this contradictory stance to the long-standing tendency of the party to oppose whatever is put forth by the ruling party. As parliamentarians debated in Ankara, the militants pressed their offensive against a beleaguered Kurdish town along the Syria-Turkey border. The assault, which has forced about 160,000 people to flee across the frontier in recent days, left Kurdish militiamen scrambling Thursday to repel Islamic State extremists pushing into the outskirts of Kobani, also known as Ayn Arab. Parliament had previously approved operations into Iraq and Syria to attack the PKK or to thwart threats from the Syrian regime. Thursday's motion would expand those powers to address threats from the ISIS militants who control a large cross-border swath of Iraq and Syria, in some parts right up to the Turkish border.