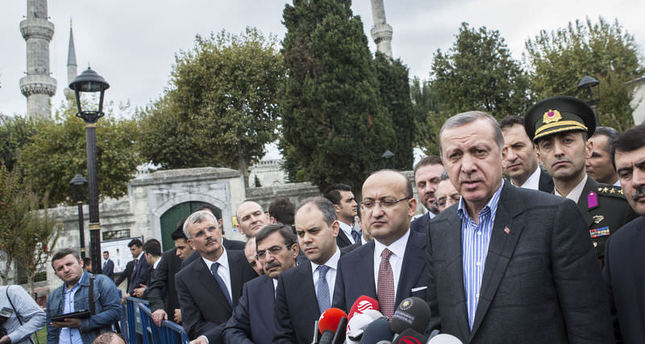 The outlawed Kurdistan Workers' Party (PKK) and the self-proclaimed Islamic State of Iraq and al-Sham (ISIS) are the same for Turkey, Turkish President Recep Tayyip Erdoğan said on Saturday.

"It is wrong to consider them in different ways (...). We need to handle them all together on a common ground," Erdoğan said, while speaking to the reporters at the Blue Mosque in Istanbul, following the morning prayer for Eid al-Adha - the festival of sacrifice observed by Muslims all over the world

Erdoğan also said that the PKK supporters are trying to manipulate the critical situation on the border, as Turkey takes in Kurdish refugees fleeing from the Syrian border town of Kobani -- where ISIS launched a fresh offensive last week.

Around 160,000 Kurdish refugees took shelter in Turkey, according to Ankara, since the country opened its border on September 19. ISIS, which controls vast areas of Iraq and Syria, has launched several attacks near the Turkish border.

The Kurdistan Workers' Party is listed as a terrorist organization by Turkey as well as by the U.S. and the European Union. Turkey has launched what is publicly known as "the solution process" to end a decades old conflict with the PKK, which has claimed the lives of more than 40,000 people.