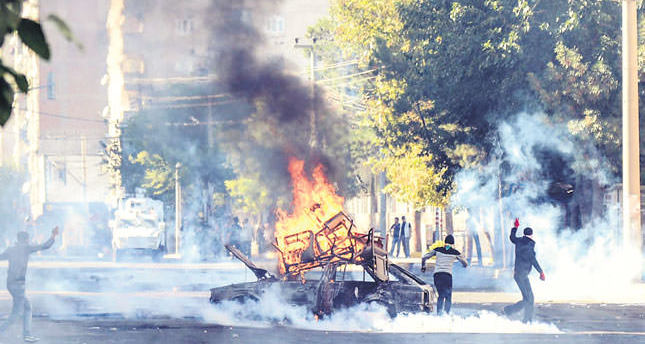 Opposing the mandate to send troops to Iraq and Syria, the pro-Kurdish HDP called for street demonstrations against ISIS and Turkey’s stance on Kobani. Speaking to Daily Sabah, Kurdish intellectuals accuse the HDP of contradicting itself and stressed the importance of dialogue

Turkey's Peoples' Democratic Party (HDP) last week expressed opposition to a government motion in Parliament seeking a mandate for military action in Iraq and Syria. However, late on Monday reports revealed that the Islamic State of Iraq and al-Sham (ISIS) had captured some parts of Kobani. Later, the HDP called for street demonstrations in Turkey against "ISIS attacks and the ruling Justice and Development Party's [AK Party] stance on Kobani."

According to the prominent pro-Kurdish columnist Vahdettin İnce, the HDP's call for street demonstrations for Ankara to take action and protect the Kurds in Kobani while voting against a government motion seeking a mandate for military action in Iraq and Syria is a very big contradiction. "It's difficult to understand the Kurdish political movement sometimes. A similar contradictory manner has happened in the recent years as well. While Parliament was discussing constitutional changes in 2010, the pro-Kurdish Peace and Development Party [BDP] boycotted the vote of amendment that would make it difficult to close down political parties even though Kurdish politics has long suffered from the banning of political parties. Today, the pro-Kurdish HDP has a similar attitude and contradiction. They voted against a government motion but called people to the streets to protest to urge Turkey for militarily intervention to Kobani," he said.

İnce also pointed out that "the Democratic Union Party [PYD] is responsible for what is happening in Kobani. They excluded other Kurdish political groups and their arrogance caused what happened in Kobani. Ultimately, innocent Kurds are being damaged once again." He added that despite all the contradictions of the Kurdish political movement in Turkey, it should continue a constructive attitude and take decisive steps to continue the reconciliation process. Orhan Miroğlu, a prominent figure in Kurdish politics who served as deputy chairman of the Kurdish Democratic Society Party (DTP), believes that the HDP's attitude is a political choice. "Whether you find it right or wrong, the HDP's stance is a political choice and this stance seems to be not in favor of the resolution process." According to Miroğlu, HDP leader Selahattin Demirtaş and PYD leader Salih Müslim both returned empty-handed from their recent visit to the U.S. and Europe and therefore, representatives of Kurdish politics should understand that Ankara is the main actor to talk with about the continuation of the reconciliation process and the future of the region.

Miroğlu also stressed the importance of leaving the door for dialogue open: "All of us have historical responsibilities in this matter. While the government should not reduce the problem as a security problem, the HDP should have understood not to take a position only through the reconciliation process." Miroğlu also stressed the importance of maintaining dialogue between the two sides and said that he considered the government's recent decision to set up a body to better coordinate the Kurdish reconciliation process positively.