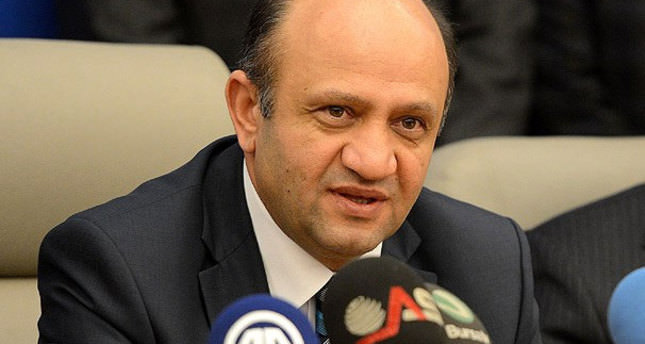 by Daily Sabah Oct 07, 2014 12:00 am
The Minister of Science, Industry and Technology Fikri Işık has confirmed that former Turkish President Abdullah Gül was wiretapped by what he called the "parallel structure," saying the issue will now be taken up by the prosecutor's office.

Işık shed light on the details of the wiretapping issue that has been occupying Turkey's agenda since the Gülen Movement first allegedly attempted to overthrow the government by operations orchestrated by the members of the movement. Gülenists have become the target of accusations that they wiretapped the encrypted phones of high-level officials. Claiming that Gül was almost certainly wiretapped by an "organization" – referring to the Gülen Movement— Işık said the prosecutor's office will look into the case from now on.

The Gülen Movement led by Fethullah Gülen, who currently resides in the U.S. in self-imposed exile, is allegedly behind the wiretapping, the release of fabricated tape recordings and wiretapping of thousands of individuals including politicians, journalists, academics, NGO leaders and prominent figures.

A series of fabricated tape recordings of current Turkish President Recep Tayyip Erdoğan, who was then prime minister, and his son Bilal Erdoğan and numerous ministers and politicians have previously been posted online prior to the March 30 local elections by agents affiliated with the Gülen Movement following the Dec. 17 and Dec. 25 operations, which are believed to have been orchestrated by the movement to topple the elected government.

The Gülen Movement operates in hundreds of locations around the world via charter schools and other activities. Their activities have been subject to government scrutiny in Azerbaijan, Russia, Germany, the U.S. and other countries. They are currently accused of infiltrating Turkish state institutions to establish "a state within the state" that would pay allegiance to Gülen. The movement denies these claims and has radically changed its political stance since the government proposed closing prep schools in Turkey, which are mostly operated by the movement. The Gülen Movement has been included in the Turkish National Security Council's (MGK) counter-terrorism's domestic and foreign security threat section in August's MGK meeting.