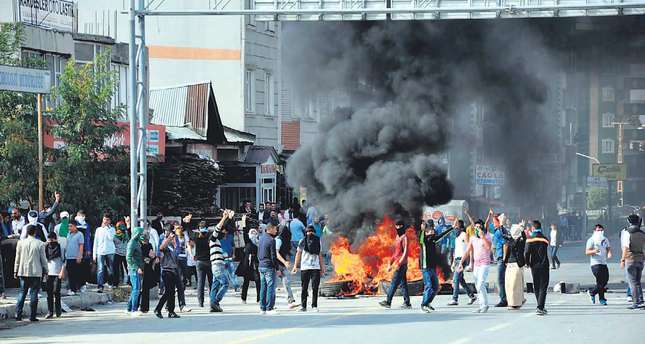 After 21 people lost their lives in Tuesday's demonstrations, the Turkish PM lambasted the opposition HDP and CHP for their provocative remarks

Following nation-wide anti-ISIS demonstrations calling for more help for Syrian Kurds, a security meeting chaired by Turkish Prime Minister Ahmet Davutoğlu convened in the capital Ankara to discuss the demonstrations, the latest development in the northern town of Kobani in Syria where the Islamic State of Iraq and al-Sham (ISIS) has been in a bloody battle with Kurdish forces. Davutoğlu held the pro-Kurdish People's Democratic Party (HDP) accountable for vandalism and the death toll, referring to the party's Monday call for street protests. Davutoğlu began his speech by offering condolences to the families of those who lost their lives and reiterated that 19 citizens died and 145 citizens were injured during the demonstrations.

Lambasting the HDP's position, the prime minister also said that for the sake of democracy, everyone should take a stance against the party's provocative call. Touching on the latest development in the chaotic region, Davutoğlu said that Turkey always extends a helping hand to those who are needy, but it is not appropriate to drag Turkey into the turmoil dominating the region.

"The 200,000 refugees [fleeing Kobani] were not sheltered by those who fuelled the demonstration, but Turkey," Davutoğlu said. "The only power that protects Kobani is Turkey, everyone should be aware of this." "I am calling to my Kobani brothers – you are an historic duty for us," he said, vowing to protect the residents of Kobani no matter what happens to provoke people across the country. Referring to Tuesday's vandalism and demonstrations, Davutoğlu said that what is necessary to ensure public order will undoubtedly be done.

Speaking of government efforts in the reconciliation process, Davutoğlu referred to incidents where provocateurs burned the Turkish flag and said that Turkey will make no concession on public order as the process continues. Davutoğlu criticized a statement on Twitter by one of the main opposition Republican People's Party (CHP) and urged CHP leader Kemal Kılıçdaroğlu to take a firm stance and make a choice between democracy and provocation. Calling on the international community, Davutoğlu said that certain circles want to create an international perception of Turkey being the only responsible body to solve the Kobani issue.

Protests supporting the terrorist group Kurdistan Workers' Party (PKK) in Syria invite terror and chaos to Turkey, Deputy Prime Minister Numan Kurtulmuş said. In remarks to press during an official visit in Macedonia, Kurtulmuş said "Nobody has the right to disturb the peace and stability in Turkey using developments in a foreign territory as a pretext." Members of Committee of Wise Men, which was set up to assist the reconciliation process between Ankara and the Kurds to end decades-long conflict, also commented on the demonstrations and called for common sense. Can Paker, who is in charge of the presidency of the committee in eastern Turkey, said that these demonstrations will have no influence over the reconciliation process. The main opposition Republican People's Party (CHP) leader Kemal Kılıçdaroğlu called for common sense regarding the demonstration and urged the government to review its foreign policy.

On Tuesday night, the opposition Nationalist Movement Party (MHP) called for commonsense to the party members as the demonstrations attacked the MHP provincial organizations. Supporting a mandate that allowed Turkey to send troops to Iraq and Syria contrary to other opposition parties CHP and HDP, the MHP was pointed as target by some protestors.
Last Update: Oct 09, 2014 10:50 am
RELATED TOPICS