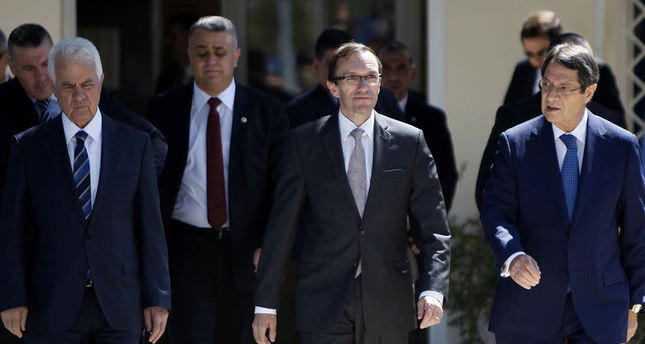 by AA
Oct 08, 2014 12:00 am
Turkey has denounced Greek Cyprus administration's decision to back away from peace talks concerning the island with Turkish Republic of Northern Cypriots.

In a written statement late Wednesday, Turkey's Foreign Ministry said the Greek Cypriot administration had been "insincere" about the peace talks.

"It is well known that Turkey and Turkish Cypriots want political equality about the issue, which has been going on for more than 50 years, but efforts coming only from the Turkish side will not solve the stalemate," said the statement.

The Greek Cypriot administration suspended the talks over the divided island on Tuesday after Turkey sent a ship to monitor an oil and gas exploration mission off the coast of Cyprus.

Turkey and the Turkish Cypriot government have strongly opposed any unilateral move by the Greek Cypriot administration to explore hydrocarbon resources around the island, saying that its natural resources should be exploited in a fair manner under a united Cyprus.

The negotiations between both sides of the island had resumed in February after a two-year pause. The last round of talks had collapsed due to the euro zone debt crisis and because it was the Greek Cypriot side's turn to occupy the EU rotating presidency in 2012.

Greek Cypriot leader Nicos Anastasiades and Dervis Eroglu, the president of the Turkish Republic of Northern Cyprus, were to hold their first meeting on Tuesday in a UN-controlled buffer zone on the island. But, upon learning of reports that a Turkish corvette had been sent to monitor the Greek-Cypriot exploration, Anastasiades abandoned the talks.

The island of Cyprus has remained divided into Greek and Turkish parts since a Greek-Cypriot coup was followed by a Turkish peace mission to aid Turkish Cypriots in the north in 1974.