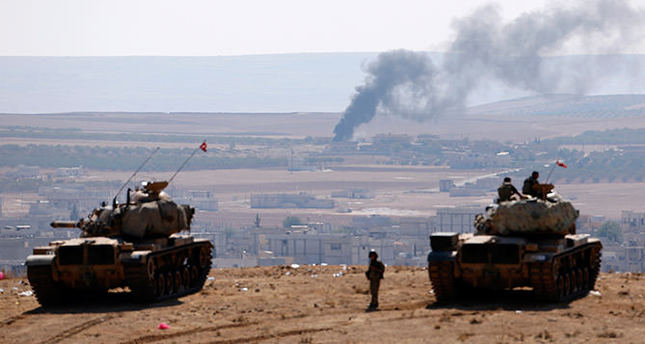 by Daily Sabah Oct 09, 2014 12:00 am
The main opposition Republican People's Party (CHP) gave the green light to support a mandate authorizing the sending of troops into Iraq and Syria following yesterday's critical Central Executive Board (MYK) meeting, with the condition that the scope of the mandate can be limited.

When Parliament discussed the mandate last week, the CHP and pro-Kurdish Peoples' Democratic Party (HDP) voted "no" whereas the far-right Nationalist Movement Party (MHP) supported it, despite certain reservations.

The party's MYK members and CHP provincial chairmen in southeastern and eastern Turkey yesterday gathered in the party headquarters in Ankara to discuss the nation-wide Kobani protests that claimed at least 25 lives as of Thursday afternoon and escalated the tension in both the public domain and the Turkish political landscape.

Speaking after the MYK, the CHP leader Kemal Kılıçdaroğlu touched upon the mandate and said the CHP will support the latest parliamentary motion as long as it is limited to repelling the Islamic State of Iraq and al-Sham (ISIS) and rescuing Kobani, a northern town in Syria witnessing clashes between ISIS and Kurdish forces, also known as Ayn al-Arab.

Kılıçdaroğlu called on protesters not to take to the streets and act with common sense. Noting that public buildings, businesses and vehicles were damaged, Kılıçdaroğlu said that the CHP will propose a law to recuperate people's losses.

Since the beginning of the protests, CHP youth branches and some CHP deputies were criticized by political actors for fuelling the protests with provocative remarks on social media. On the first day of the protests, some CHP youth branches announced on their Twitter accounts that the people of Kobani, which has been under siege by ISIS, are not alone and called for demonstrations in Istanbul's Kadıköy and Beşiktaş districts – the districts in which CHP supporters are most represented.

A rally organized by the main opposition to support Kobani was also cancelled on Oct. 8 due to the increase of provocative and violent acts.

Slammed by Turkish Prime Minister Ahmet Davutoğlu for being provocative, CHP Deputy Chairman Sezgin Tanrıkulu, on his twitter account, called to ensure a conscientious unity between last year's Gezi Park protests and Kobani protests on Oct. 6. Yesterday, Tanrıkulu, responding to Davutoğlu's criticism and said his tweets were to call people to act with common sense.