Demirtaş calls on world powers to act before ‘Kobani massacre’ 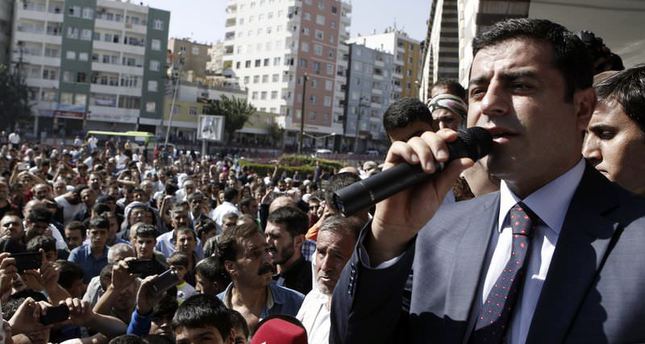 by Mehmet Solmaz Oct 09, 2014 12:00 am
SpeakIng at a press conference on Thursday, pro-Kurdish Peoples' Democratic Party leader Selahattin Demirtaş accused world powers of doing "nothing" for Kobani and said Kurds will hold the international community responsible "in case of a massacre in Kobani." The government has accused the HDP of fueling violent protests in the country.

Ankara had accused the HDP of causing the street violence that caused the deaths of at least 24 people across the country after the party called its supporters to take to the streets to protest the Islamic State of Iraq and al-Sham (ISIS) attacks and lack of international support for in the Kurdish-populated Syrian town of Kobani.

After several days of clashes among pro-PKK and anti-PKK Kurdish groups in southeastern Turkey, Demirtaş held a press conference on Thursday where he rejected the allegations that his party and lawmakers had called for mass violent demonstrations saying they called for unity and peaceful protests across the country to draw attention to halt the ISIS attacks.

The HDP issued a statement on Tuesday urging citizens to "go out into the streets" saying, "From now on, Kobani is everywhere."

Demirtaş said, "We all have to collaborate against ISIS militants to help Kobani, which is an indication of solidarity with its people. We just urged our people to hold peaceful rallies and never invited them to carry out violent acts."

Foreign Minister Mevlüt Çavuşoğlu also accused the HDP of fueling protests and harming the reconciliation process that aims to end the decades-long conflict in southeast Turkey. "[HDP deputies] who voted 'no' on the parliamentary motion authorizing force against ISIS are now blocking the solution process."

"We might have different opinions from some of our allies, but Turkey will play its due role if a [collective] decision is taken. Turkey will do its full share of work without doubt," Çavuşoğlu said.

Speaking to Daily Sabah on Thursday, journalist and writer Oral Çalışlar drew attention to the ongoing reconciliation talks between the government and Kurds and said the efforts for the process had not erased the questions that both sides have. Çalışlar accused both sides of not using constructive language when addressing the crisis in Kobani and claimed that there are still people who could not digest the reconciliation process and accused these people of leading the violent protests.

Releasing an official statement on Thursday, Turkish President Recep Tayyip Erdoğan said "Turkey will never tolerate any traps against our peace, stability or sense of brotherhood."

The nationwide protests broke out after ISIS militants penetrated Kobani, also known as Ayn al-Arab, on Monday. The protesters have used the claim that the Turkish government has done nothing to halt the relentless advance of the militant group in the Syrian Kurdish city, which has become a scene of fierce street battles between Kurdish groups and ISIS militants.