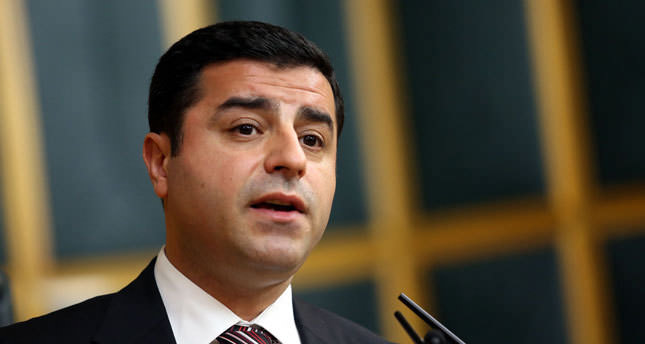 by Daily Sabah Oct 09, 2014 12:00 am
Selahattİn Demirtaş, leader of the pro-Kurdish Peoples' Democratic Party (HDP), has condemned protestors burning the Turkish flag during anti-ISIS protests which claimed 12 lives across Turkey, deeming the offence as an act of provocation aiming to block aid from western Turkey reaching the east of the country. A group of masked protesters raided a high school located in Ağrı province and took down a Turkish flag flying from a pole and burned it, an offensive that was slammed by HDP leader Demirtaş. Protesters also damaged sculptures of the founder of the modern Turkish Republic Mustafa Kemal Atatürk, gestures likely to infuriate nationalist Turks and the government. Demirtaş, who is seeking arms support from the West for Kurds fighting against ISIS said, "I condemn those who burn flags and [attack] statues of Atatürk. These are provocations carried out to prevent help coming to the east from the west of Turkey."

The expanding threat posed by the militant group in Kobani led to the influx of 180,000 refugees fleeing to Turkey. The flow of refugees, which is continuing apace, as the threat does not seem to be contained in the region, is feared to harm the reconciliation process seeking to end the decades-long conflict between the Turkish government and PKK. Last week the ruling party came up with a measure to protect its borders in case of an emergency against the ISIS threat. A motion giving Ankara authority to send troops to Iraq and Syria was submitted to Parliament last Tuesday. The resolution, which passed overwhelmingly despite opposition by the HDP and Republican People's Party (CHP), also allows foreign soldiers to be stationed in Turkey and use its military bases. Before the motion passed Parliament, Demirtaş expressed his opposition to it saying the boundaries of the authority the government receives in the motion with regard to the extent of the military intervention in the region are very vague.

"We don't say there should be inaction toward what is going on in Syria. But what we propose as a solution to the issue differs from what the government [has suggested]. There is no clarity in the motion as to with what purpose could external military forces be placed in Turkish territory and for how long they could be stationed here," Demirtaş said roughly a week ago, explaining the argument for their "no" vote on the motion.

Demirtaş said the HDP prefers the solution to support the local groups fighting ISIS. After expressing discontent over the protestors burning Turkish flags, Demirtaş delivered remarks on Wednesday regarding the threat surrounding Kobani.

"A passage should be formed in order to convey supplies that can reach Kobani instead of a safe zone. Kobani can defend itself. We will take this resistance to victory. I wholeheartedly believe it. The ones expecting Kobani to fall are shocked at this resistance," Demirtaş said. "The advance of the tanks was halted by the will of the fighters."

ISIS militants launched an offensive in mid-September capturing many villages surrounding the northern Syrian city of Kobani from Kurdish fighters in the People's Protection Units (YPG). The militants began their heaviest attack on Kobani since they besieged the town on Sunday. Heavy artillery, tanks, mortars and anti-aircraft guns were used in clashes while light weaponry explosions could also be heard from the Turkish side of the border.