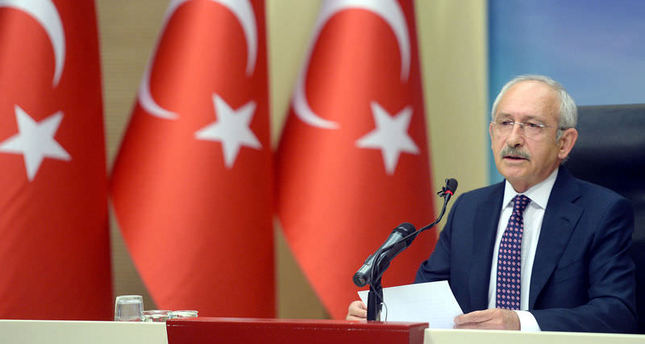 by AA Oct 09, 2014 12:00 am
Turkey's main opposition has said it will support a parliamentary motion authorizing a ground operation by the Turkish army aimed at saving Kobani and repelling the ISIS as long as it is limited.

The comments by Kemal Kilicdaroglu, leader of the Republican People's Party, or CHP, came on Thursday after nationwide protests broke out in Turkey, which have claimed 25 lives so far, after ISIS militants penetrated the Syrian border town with a Kurdish population on October 6.

Speaking at a press conference at the party headquarters in Ankara, Kilicdaroglu said: "As CHP, we will give any support for Turkey's perpetuity."

But he rejected an article of recently approved parliamentary motion enabling the deployment of foreign soldiers in Turkey, saying: "Instead of that, we can provide cooperation for air strikes."

The Turkish parliament accepted a government motion on October 2 authorizing military action in Syria and Iraq against any terrorist group, including ISIS.

The motion allows military incursions into Syria and Iraq against a threat to Turkey and allows foreign forces to use Turkish territory for possible operations against ISIS.

Meanwhile, Kilicdaroglu reiterated his call for calm after street protests rocked provinces around the country, saying Turkey will overcome the problems and restore its domestic security.

ISIS launched an offensive in mid-September on Syrian town of Kobani, also known as Ayn al-Arab near the Turkish border, and recently captured some surrounding villages.

More than 180,000 Kurdish refugees have fled across the border since ISIS's advance.