FM Çavuşoğlu: Without a land operation ISIS cannot be eradicated 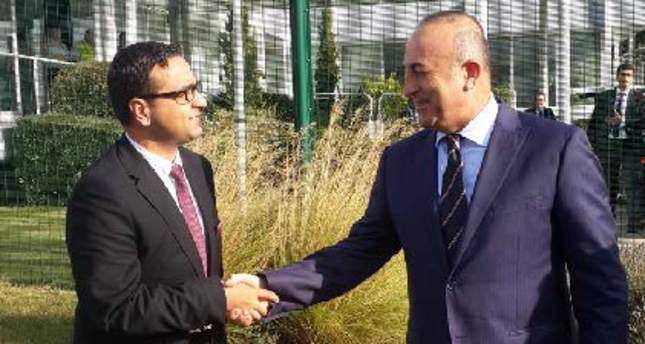 by Ali Ünal Oct 10, 2014 12:00 am
Claimıng that the eradication of ISIS is not possible with air strikes alone, Turkish Foreign Minister Mevlüt Çavuşoğlu asserted that Western countries that desire a land operation against ISIS are also aware of this fact. "ISIS assaulted Mosul and Tal Afar three months ago, now they are attacking Kobani. This is an indicator that an operation which targets a particular region or city will not be effective."

During his flight to France to meet French foreign minister Laurent Fabius, Turkish Foreign Affairs Minister Mevlüt Çavuşoğlu spoke with Daily Sabah and answered questions about the crisis with the Islamic State of Iraq and al-Sham (ISIS) and current regional events.

Saying that the eradication of ISIS is not possible with air strikes alone, Çavuşoğlu asserted that the Western countries that desire a land operation against ISIS are also aware of this fact. Indicating that the necessary conditions must first occur before a land operation could commence, Çavuşoğlu said that there is a common opinion about it; however, there is timidity when it comes to decision-making. Çavuşoğlu, referring to the Syrian town of Kobani – also known as Ayn Al-Arab – highlighted that a land operation targeting a limited area will not yield the expected results. Çavuşoğlu added, "ISIS assaulted Mosul and Tal Afar three months ago, now they are attacking Kobani. If no precautions are taken, they may attack various other regions in the upcoming weeks. Even this as it is an indicator that an operation which targets a particular region or city will not be effective."

Çavuşoğlu said that if the allies are sincere about organizing a land operation, this should be executed through the distribution of duty, and emphasized the importance of establishing no-fly and safe zones. Çavuşoğlu claimed that as the conflicts in Syria continue, the flow of immigrants to Turkey will increase, and added, "Therefore, to prevent new waves of immigration, the establishment of safe zones is essential."

Clarifying the issue of a buffer-zone, which requires U.N. Security Council approval, Çavuşoğlu affirmed, "Our demands is for the declaration of a no-fly zone and the establishment of safe zones. In this way, Turkey will be able to control the flow of immigrants to its lands," and he highlighted that the consensus of the coalition is essential in setting up safe zones.

Çavuşoğlu also shared information about his meeting with NATO Secretary General Jens Stoltenberg. Çavuşoğlu said that NATO does not have direct involvement in the War on Terrorism; however, they could assist in regional stability by training the Iraqi military, for instance. Çavuşoğlu said that France and the U.K. are the two closest countries that echo Turkey's discourse, however, there is still no consensus regarding a land operation.

Emphasizing that Turkey will not engage in a land operation by itself, Çavuşoğlu added, "We will not engage in a land operation on our own. This burden must be shared with other members of the coalition. Our disposition in this issue is clear." Çavuşoğlu asserted the need for an extensive strategy while prioritizing the security of the Turkish military. Emphasizing that Turkey will be ready to fulfill its duties after a possible consensus, Çavuşoğlu said that they are showing determinacy on this subject while in meetings. Çavuşoğlu said that they were not able to convey their determinacy in the fight against ISIS publicly due to the fact that hostage situation was not yet defused at the time; however, he clarified that this message has since been conveyed in all of the bilateral discussions with the coalition members.

Çavuşoğlu further indicated that air strikes and land operations that aim to contain ISIS will not result in the stability of the region. "Even if we stop ISIS with such operations, as long as the political instability in Syria and Iraq continues, the chaos in the region will cause the emergence of new terrorist organizations," he said.

Highlighting the need for an extensive plan to bring stability and security to the region, Çavuşoğlu claimed that the resolution of this issue lies in the alteration of the administrations in Syria and Iraq. "While the alienating and sectarian policies during the al-Maliki government in Iraq was the main cause of instability in the country, it provided the necessary conditions for the growth of ISIS. Even though the Maliki administration is gone, there is still distrust among different groups due to the mistakes made. The Al-Assad administration in Syria, which has killed 200,000 people with chemical and conventional weaponry, is the cause of instability in Syria," he said.

Pointing out the need for a new government to achieve a resolution on Syria, Çavuşoğlu added, "The new administration in Syria should be an inclusive one that also allows for the representation of the people who support Assad. Only in this way can the stability of the region can be achieved."