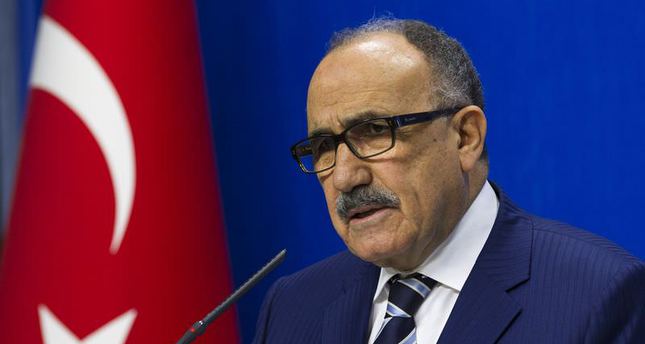 by AA Oct 10, 2014 12:00 am
A spokesman for Turkey's ruling Justice and Devlopment (AK) Party has stated that, except for Kurdish fighters and ISIS militants, the border town of Kobani (Ayn al-Arab) was essentially empty.

"Currently there is no one left in Kobani except the Kurdish PYD militants. Everyone else in Kobani has come to Turkey," said deputy chairman of AK Party Besir Atalay on Friday. The PYD is the Syrian affiliate of the outlawed PKK.

Nearly 200,000 Syrians of Kurdish origin have fled from the city of Kobani to neighboring Turkey over the last two weeks ISIS has incessantly attacked the town.

Atalay also proceeded to blame certain political parties for urging citizens to go out into the streets, in reference to the nationwide protests in Turkey, in which at least 31 people have died.

The pro-Kurdish Peoples' Democratic Party, or HDP, had issued a statement on Tuesday urging citizens to "go out into the streets" saying: "From now on, Kobani is everywhere." The protesters demanded the use of Turkish military force against ISIS in Kobani.

For the past year, the Turkish government has been making efforts towards what is domestically known as the ?solution process' to end a decades-old conflict between the state and the outlawed Kurdish separatist PKK.

"Both the hands that pulled the trigger and masterminding the attack will be poundered," added Turkish Deputy Prime Minister Numan Kurtulmus in reference to the deaths on Thursday night of two police officers during clashes with pro-Kurdish groups.

One police chief and another police officer were shot dead, late Thursday, in the eastern province of Bingol, while they were investigating property damage from the recent fatal protests.

"Whoever behind this heinous attack, whoever its perpetrators, and whichever dark groups they are must well know that Turkey will never fall into traps made by the dark and bloody hands of terrorism," he said at Tetova State University during a visit to the city of Tetova in Macedonia.