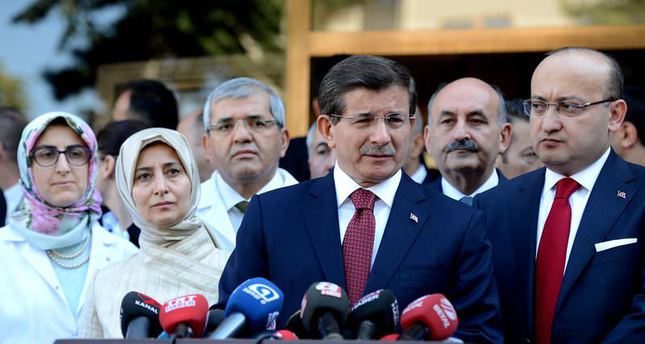 Davutoglu's remarks came after a night of violence in Turkey's southeastern province of Bingol on Thursday in which one police chief and another police officer were shot dead by terrorists.

"As the government, we will never allow feuding or bloodshed, no matter who incites provocation," he said in a speech in Turkey's central-eastern Malatya province.

Turkish premier maintained that the protesters aimed at making mischief among Turkish people, using the incidents in Syrian border town Kobani as an excuse.

"While we were celebrating the Eid al-Adha in an atmoshpere of brotherhood, suddenly agent provacateurs aiming to foment trouble in the country took the stage and that led to the killing of 31 citizens and two policemen," he said.

Davutoglu promised that they will strictly hunt down and arrest those who undertake such actions.

The killers of the two Bingol policemen, three PKK terrorists, were shot dead later on Thursday.

"We will overcome the provocations and plots of the conspirators. We will keep the reconciliation process going with a resolute will," added Davutoglu.

What we understand as the reconciliation process is to embrace all as brothers and sisters, to enable all to speak their mother tongue and live their cultural values, on the condition that terror and violence are shunned. That's our democracy, which is the guarantee of our national unity and brotherhood," Davutoglu concluded.

The protests, which began on October 6, were to demand that the Turkish government support the outlawed separatist PKK's offshoot PYD's actions in the besieged town of Kobani near the Syrian border.

The pro-Kurdish protesters have used the pretext that the Turkish government has allegedly done nothing to halt the relentless advance of the ISIS terrorist group in Kobani, which has become a scene of fierce street battles between Kurdish fighters and ISIS militants.