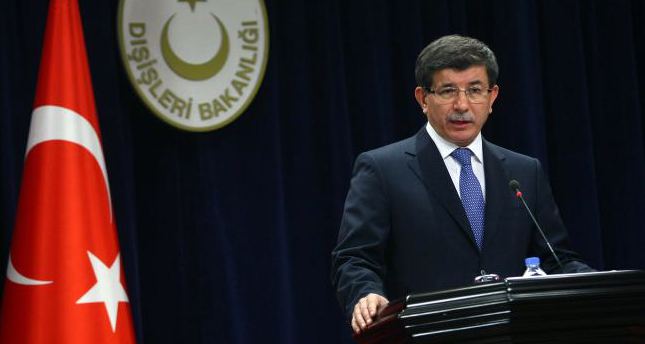 Prime Minister Ahmet Davutoğlu yesterday harshly criticized the main opposition Republican People's Party (CHP) leader's statement that the party will support a mandate authorizing the sending of troops into Iraq and Syria with the condition that the scope of the mandate be limited.

Davutoğlu said that the only objective of Kılıçdaroğlu is to protect the Bashar al-Assad regime in Syria.

"I am calling on Kılıçdaroğlu: Turkey is both against ISIS [the Islamic State of Iraq and al-Sham] and the Assad regime," added the prime minister, urging Kılıçdaroğlu not to give credit to provocateurs. Following Thursday's Central Executive Board (MYK) meeting, the CHP leader touched upon the mandate and said the CHP will support the latest parliamentary motion as long as it is limited to repelling ISIS and rescuing Kobani, also known as Ayn al-Arab, a northern town in Syria witnessing clashes between ISIS and Kurdish forces. Kılıçdaroğlu also accused the government of helping ISIS.

Later in his speech, CHP leader Kılıçdaroğlu called on protesters not to take to the streets and to act with common sense. Noting that public buildings, businesses and vehicles had been damaged, Kılıçdaroğlu said that the CHP would propose a law to recuperate people's losses. Dismissing the CHP leader's allegations, Davutoğlu stated that Kılıçdaroğlu openly accused the government while calling for commonsense and contradicted himself in such a critical process that violent protests spread across the country.

"It is not possible to understand Kılıçdaroğlu. On the one hand, he [Kılıçdaroğlu] called for common sense; on the other hand, he reiterated the thesis that Turkey helps ISIS. In such a critical period in which people are being provoked through the 'Turkey is helping ISIS' thesis; Kılıçdaroğlu's statement is irresponsible and treasonous. No one can prove that Turkey is helping ISIS." When Parliament discussed the mandate last week, the CHP and pro-Kurdish Peoples' Democratic Party (HDP) voted "no," whereas the far-right Nationalist Movement Party (MHP) supported it, despite certain reservations. Speaking to the Anadolu Agency, ruling Justice and Development Party (AK Party) lawmakers criticized the CHP for a new parliamentary motion to save the Syrian town of Kobani. Voting "no" on the mandate, Kılıçdaroğlu instead called for an altogether new motion that would authorize Turkey to cooperate in U.S.-led coalition airstrikes on ISIS targets in Syria and Iraq. AK Party Deputy Group chairman Ahmet Aydın said, "On one hand, the CHP wants the government to protect Kobani, while on the other hand they voted against the motion that authorizes the government to fight against the ISIS threat."

Aydın termed the opposition party's demand as "insincere" and "contradictory." AK Party Diyarbakır deputy Galip Ensarioğlu said the CHP had never supported the Turkish government for its steps in Syria and Iraq. Diyarbakir is one of the largest cities in southeast Turkey where "illegal and unauthorized" demonstrations in support of the Kurdish groups in Kobani have been held since Tuesday last. "It is impossible to open an aisle to Kobani over Turkey," Ensarioğlu said. He added that more than 2,000 armed PKK militants across Turkey occasionally carry out terror acts. The PKK took up arms against the Turkish state with the aim to carve out a separate state in the southeastern region in the 1980s and is accepted as a terrorist organization by the U.S. and EU. Parliament authorized the government on Oct. 2 to deploy troops in Syria and Iraq to fight "any group" that threatens the country. ISIS launched an offensive in mid-September on Kobani and is now said to be on the brink of capturing the key town.